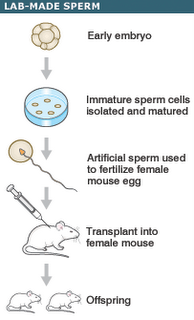 To go with the earlier post about the artificial womb. Now, we're finally almost at the point where we can remove humans from the reproductive process altogether.

"Scientists have proved for the first time that sperm grown from embryonic stem cells can be used to produce offspring.

The discovery in mice could ultimately help couples affected by male fertility problems to conceive...

The experiment was carried out using mice and produced seven babies, six of which lived to adulthood.

However, the mice showed abnormal patterns of growth, and other problems, such as difficulty breathing."

More here.
Posted by GreenFertility at 8:36 AM

The first myth pertaining to this disease is that it only affects women.

Second myth that is associated with this disease is that if one has found a lump during an examination, it is cancer.

Third is that it is solely hereditary

Conversely, some individuals foolishly believe that breast size determines whether or not one gets cancer.

Finally, another myth that is associated with this disease is that it only affects older people. This is not so. Although the chance of getting breast cancer increases with age, women as young as 18 have been diagnosed with the disease.

You can find a number of helpful informative articles on Breast Cancer facts at breast-cancer1.com