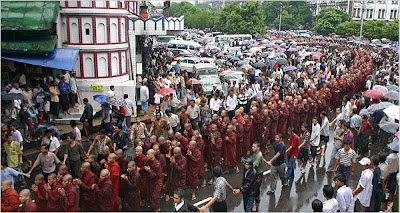 I think this picture of Buddhist monks in Myanmar peacefully protesting the military government--and being guarded by supporters--is so beautiful. Feel the energy! From the NY Times:

BANGKOK, Sept. 24 — Protesters poured onto the streets of Myanmar’s cities in unprecedented numbers today, pushing a month-old confrontation with the military government toward an unpredictable and possibly dangerous outcome.

In the country’s largest city, Yangon, the Buddhist monks who have led the protests for the past week were outnumbered by civilians, who included prominent political dissidents and well-known cultural figures.

A crowd estimated by The Associated Press to be as large as 100,000 set out in the morning from the gold-spired Shwedagon Pagoda and marched unopposed in separate columns through the city.

As they have in past days, some monks carried their begging bowls upside down, in a symbol of their refusal to receive alms from members of the military.

Other protests were reported in Mandalay, Sittwe and Bago. Monks and their supporters have marched in other cities as well in recent days.

The government continued to remain silent and mostly out of sight, giving the streets over to the protesters with virtually no uniformed security presence in evidence.

For all the energy and jubilation of the crowds, the country formerly known as Burma seemed to be holding its breath. As the demonstrations expanded from political dissidents a month ago to Buddhist monks last week to the broad cross-section of the public that filled the streets today, the government’s options seemed to be narrowing.

The demonstrations proceeded under the shadow of the last major nationwide convulsion, in 1988, when even larger pro-democracy protests were crushed by the military at the cost of some 3,000 lives.

“We are in uncharted territory,” said the British ambassador to Myanmar, Mark Canning, speaking by telephone from Yangon after observing the crowds today.

“These demonstrations seem to be steadily picking up momentum,” he said. “They are widely spread geographically. They are quite well organized, they are stimulated by genuine economic hardship and they are being done in a peaceful but very effective fashion.”

One possible outcome is that the demonstrations could simply run out of steam. But their rapid growth and the pent-up grievances that are driving them make that seem unlikely. With each day, the size of the crowds seems to attract even more participants.

Another possibility is the opening of some form of compromise or dialogue between the government and its opponents. But that is an option the country’s military rulers have never embraced.

Instead, they have jailed their political opponents, held the pro-democracy leader Aung San Suu Kyi under house arrest and rejected the demands of the country’s marginalized ethnic minorities...

read more here. (use our login: GREENFERTILITY for username and password/soylent green is the answer to thte secret question)