I'm traveling right now, and while I normally use organic pads (see here why you should avoid tampons), I had a limited amt of baggage so so thought I'd just buy some form the drugstore. I know they have dioxin and bleach and icky things, but the absorption is much less than using tampons and I thought, just this once...

But then I saw this article, and next time, I am going to trek to the health food store and, if I must use disposables, get dioxin free natural pads. Ugh.

According to a February 2000 report from the Food & Drug Administration, tampons and feminine hygiene products currently sold in the U.S. are made of cotton, rayon, or blends of rayon and cotton. Even though these products are now produced using elemental chlorine-free or totally chlorine free bleaching processes, these methods can still generate dioxins at "trace levels." Thus, there may be low amounts of dioxin present from environmental sources in cotton, rayon, or rayon/cotton tampons and feminine hygiene products. By contrast, a report released by The US Environmental Protection Agency clearly describes dioxin as a serious public health threat. The EPA report states, there is no "safe" level of exposure to dioxin - even trace amounts are a risk. Further, the EPA report confirmed that dioxin is "a cancer hazard to people;" that exposure to dioxin can also cause severe reproductive and developmental problems (at levels 100 times lower than those associated with its cancer causing effects); and that dioxin can cause immune system damage and interfere with regulatory hormones.

Dioxin exposure to women in particular, poses additional risks than just that of their own health: it crosses the placenta into the growing infant and is also present in the fatty breast milk, thereby exposing the child.

Evidence of dioxin as a catalyst for Endometriosis has been well-documented. In a 1996 Environmental Protection Agency study, dioxin exposure was linked with increased risks for Endometriosis, as well as the increased risks of pelvic inflammatory disease, reduction of fertility, and interference with normal fetal and childhood development. The EPA conclusions regarding dioxin exposure are particularly alarming in light of a 1989 Food and Drug Administration report, which stated that "possible exposures from all other medical device sources would be dwarfed by the potential tampon exposure." Dr. Philip Tierno, Jr., Director of Clinical Microbiology and Diagnostic Immunology at New York University Medical Center states that "dioxins, though they exist in the environment, have a worse effect when they contact mucous surfaces like the vagina."

Read more about how dioxin levels in menstrual products--and playground sand, thanks, Jack Welch!) are almost ENTIRELY UNREGULATED and what they found when they tested some Playtex tampons: click here for UGH.
Posted by GreenFertility at 4:15 AM No comments:

Unfortunately with artificial fertiltiy techniques, it's hard to tell some of the side effects until enough people have done them to see a pattern and/or the kids have grown old enough. Here's an article on ART and risk of cerebral palsy:

I had to get a postpartum MMR shot, and I remember being reassured the LIVE VIRUSES would not be transmitted to my sweet newborn--there's a reason people wash their hands before holding babies: they don't have a working immune system.

Then my friend contradicted this, telling me that a recently MMR'd person was not allowed near a family member with leukemia due to transmission worries. So I looked it up in the Physician's Desk Reference, and yep, there is was--MMR can be transmitted via respiration AND breast milk. GAHHHHH.

Part of the problem is, we don't really know what vaccines do, besides the antibody thing, and we don't really care. Here's a case of the smallpox vax infecting a sexual partner, and what does the doctor do? Even though she tells him about the vax, he only tests her for STDs?

Military folks (the only ones who really get the smallpox vaccine these days) andt hose who have sex with them watch OUT:

THURSDAY, July 1 (HealthDay News) -- After having sex with a soldier recently vaccinated against smallpox, a young woman in Washington state developed an illness caused by the vaccinia virus used in the shot, U.S. health officials report.

This type of viral transmission, while rare, is not unheard of, according to the U.S. Centers for Disease Control and Prevention.

Flame retardants can harm your thyroid and pregnancy

Gah, 10 years ago we got rid of our carpets and brand new couch when we were about PBDEs, the common flame retardant. The stupid thing is, as we heard from our friend who is a furniture maker, that PBDEs make stuff burn A FEW SECONDS slower than untreated stuff and then you have the fumes. So basically the flame retardants do nothing.

So we bought new stuff from IKEA because PBDEs are banned in Europe. However, I've heard lately that because of US reg's IKEA stuff now reeks because they have special US-export pieces that they impregnate.

One of the horrible things the PBDEs do is disrupt your endocrine system, including your thyroid. Interestingly, both my cat and I developed thyroid problems in the house where we had the new stuff (PBDEs degrade/outgas over time). Especially if you're pregnant now you might want to read about how PBDEs can affect your pregnancy. From Pubmed: 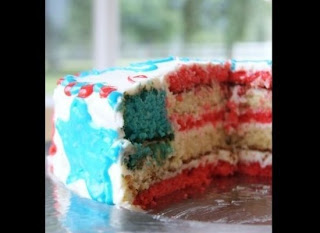 I hope everyone has a happy, safe Fourth. With my parents being immigrants, they took the Fourth very seriously. I remember even traveling to NYC to celebrate the Bicentennial.

That said, while holidays are a nice time to get together, the weather's usually right for BBQ, is anyone else weirded out about the quasi-flag/patriotism worship this holiday engenders, as kind of a knee-jerk thing? It makes me wonder if this is one of those subtle things that sets up thinking apart as opposed to being part of a larger world.

For instance, Koreans probably have to be as patriotic and love their country as much as anyone. But to envision a holiday celebrating the country, and feeling compelled to fly a flag AND eat and bake renditions of it, would seem really strange, maybe pompous, too.

Sorry if I'm a stick in the mud. But if you're the type who really, really likes an excuse to eat a lot of red and blue food coloring, here's a whole slew of "patriotic" foods to choose from, couresty of the Huffington Post.
Posted by GreenFertility at 5:18 AM 1 comment:

I was wondering where this feed of all this K-Pop (Korean-pop) stuff was coming from. Some other user has my old Twitter handle and my name, "MyungOk."

Please follow me as MarieLee_Writer. I post a lot of the quicker, more urgent health news here as time permits.
Posted by GreenFertility at 5:13 AM No comments: