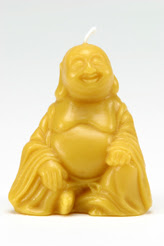 You know why you get grumpy during the winter months? It's not just the lack of Vitamin D/sun but also the lack of negative ions. You know how the air feels so great at the beach, or after a thunderstorm? It's because of the negative ions generated by Mom nature.

But in the winter when we're stuck inside, the dry heat tends to make static and positive ions, which are actually bad for you. The Santa Ana and mistral winds are those winds with a reputation for making people crazy or bringing bad vibes. Interestingly, they are also full of positive ions.

Beeswax candles are an awesome and fragrant way to get some cheer-making negative ions into your life. This smiling Buddha from Sunbeam Candles is the best. Not only that, but this company is RUN ON SOLAR POWER. What more could you ask for?

They also have a ton of other styles (e.g., plain votives) in case you have qualms about burning Buddha.
Posted by GreenFertility at 9:44 AM

I love the mental shifts! (negative ions>candles)
This post is sitting on the screen in my store for the day -- I sell Sunbeam candles. They're the best...