How to undo MSG damage 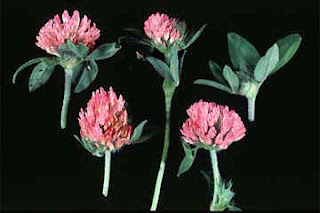 This is kind of interesting, especially since red clover is a blood purifier and good for fertility (it's mildly estrogenic herb, so check with your health care person if you have hormonal issues, and as with everything, moderation is key), but Susun Weed thinks red clover is the # fertility herb.

Also, don't just pick clover if you see it in a farmer's field--it's likely been sprayed!

(NaturalNews) If you are into healthful eating, it can be tough when friends or family want to go out to the local restaurant to eat. You know most of the food there is laced with monosodium glutamate (MSG), and this knowledge can really spoil your fun. Now a new study has found that pre-treating yourself with a supplement of red clover before you go out can nullify the potential for brain damage from MSG.

The June 5, 2008 edition of Phytomedicine reports a study based on an idea generated by the knowledge that estrogen has been shown to affect neuronal growth, differentiation and survival. Genistein, diadzein and other isoflavones have been shown to mimic the pharmacological actions of the steroid estrogen, due to their similarity of structure. So, researchers hypothesized that the natural mixture of phytoestrogenic isoflavones found in red clover could protect the brain from glutamate toxicity. They used a human cortical cell line to test the efficacy of the red clover. Neuronal viability was determined and neuronal membrane damage was quantitatively measured.

No serious side effects from red clover have been reported in humans. Infertility has been noted in grazing animals that consume large quantities.

read more here.
Posted by GreenFertility at 6:44 AM

I just found your blog and I am so pleased to see that someone out there is trying to help women conceive naturally. I run an infertility forum as well as have my own blog that documented my own struggle with 3 years of infertility. I can say that I began taking Red Clover in a pill form along with conventional infertility treatments and was pregnant the following month! I do credit my pregnancy to the addition of red clover to my daily regimen.