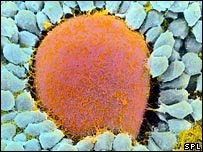 In a natural conception, the egg is surrounded by all these sperm...but only one (sometimes two at the same time) gets in. If you watch the real time movies of the process, it's not a race to see which sperm gets there first. The egg sits there like this for a while, almost as if deciding which sperm to let in.

The successful sperm has to have many factors: it can't be weirdly shaped so it can't swim, it has to be fast enough to stay with the crowd, it has to secrete a special enzyme that dissolves the outer layer of the egg.

Nature builds in its own protection, and thus lame-o sperm, which is also likely to have DNA damage, get left by the wayside. But there is a way that doctors can FORCE the egg to accept a sperm, by ICSP, intracytoplasmic sperm injection, where they pierce the egg with a needle and push the sperm in. Nor surprisingly, they are finding kids born of this procedure often have genetic or other anomalies.

So one other IVF procedure they often add to this is PGD, pre implantation genetic diagnosis, where they "steal" a call from from a new multicelled fertilized egg and examine the DNA. As you can imagine, when the blastocyst is only made up of a few cells, it kinda needs them. Amazingly, the long term effects on children born to PGD haven't been studied, until now:

(NaturalNews) Preimplantation genetic diagnosis (PGD) has become an important part of the booming infertility and baby-making medical industry. This example of unnatural selection allows for the chromosomes of an embryo created through in vitro fertilization (IVF)to be analyzed. If there's a problem, the embryo can be discarded or, at the very least, frozen away. PGD has helped many couples conceive children believed to be totally healthy and the procedure is promoted as a widely used and safe medical test -- at least, until now. A new long-term analysis of PGD suggests that this procedure may hold serious long-term risks for humans subjected to this test while they were embryos. Animal tests have come up with worrisome evidence PGD could increase risks of obesity and dementia in adulthood.

read more.
Posted by GreenFertility at 6:29 AM

A person becomes obese over the years because of excessive eating. But if one will have the courage to shed those fats then it will also take some years. Persistence is necessary to gain back the healthy body to avoid unwanted complications.
-----
Fat Loss Facts