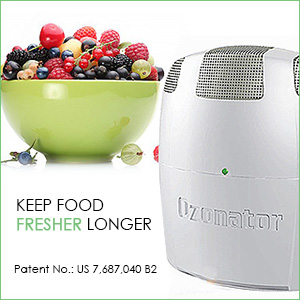 I actually have an ozonator to ozonate water because it's healthful. You probably know about theozone layer, but ozone is actually the natural way our planet cleans itself. You've probably smelled ozone after a big thunderstorm--it's that clean smell.

The Original Ozonator is a gizmo that ozonates the air in your refrigerator. It basically gets rid of things like mold and bad bacteria, so it freshens and also--here's the kicker--it KEEPS FOOD FROM GOING BAD FASTER. Foods that are full of natural bacterias and yeast decompose faster--think of how quickly berries like strawberries go bad. Or the "bloom" you see on blueberries is a yeast that starts the berry fermenting. The Ozonator gets rid of stuff like that and you will save money because your food lasts longer naturally.

Of course, it's not suspended animation--your food will still go bad. However, as an inadvertent test, when we left for Christmas vacation for a week, an expensive package of opened organic turkey (already a few days old) had been left behind, and I was sad it was going to go to waste.

When we got back, I was surprised that it still looked fresh and indeed was not only edible, but still good.

The Ozonator is small and unobtrusive, and works much better than a bo of baking soda. One thing I will caution is that it can be irritating to breathe in ozone, so don't put your face in it while you have the fridge open, wondering what to eat for a snack...
Posted by GreenFertility at 1:27 PM