SSRIs may cause bone loss 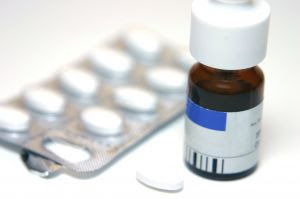 When I was at an artists' colony (not the one I was just at) I was having a conversation with about 15 people and it turned out I was the ONLY writer/artist not on SSRIs--prozac, paxil, zoloft, etc. Believe me, I'm as depressive as you can get (stereotypical writer, etc.) but fooling with my brain scares me.

Here's another blip I got from Newswise, a journalists' only site (funny, how all this breaking news never seems to make it to the main stream):

The class of antidepressant medications known as selective serotonin reuptake inhibitors may be associated with an increased rate of bone loss in older men and women, according to two articles in the June 25 issue of Archives of Internal Medicine, one of the JAMA/Archives journals.

Selective serotonin reuptake inhibitors (SSRIs) treat depression by inhibiting the protein that transports serotonin, a neurotransmitter involved in sleep and depression, according to background information in the articles. This protein has recently been discovered in bone as well, raising the possibility that SSRIs may affect bone density and the risk of fracture. SSRIs account for about 62 percent of antidepressant prescriptions in the United States, and are often prescribed to the elderly...

And, here's an essay in Slate Magazine of one writer's misadventures with paxil--sounds really scary, esp. the part about the "sparks." Luckily, he stopped it before he lost his mind and/or broke his hip. Read it here.
Posted by GreenFertility at 5:51 PM

That's typical redundant information - when all medicine is bad, then why read information about any - why not avoid all of it? :)

Good for you! I have slowly given up a lot of things over a period of time - no salt, sugar, spices or oil at all anymore. I never thought I could reach this point in life, but its awesome & my focus is on prevention by building a strong immune system such that the next step of a cure never arises. People always talk of doing all things in moderation - but besides the obvious physical benefits of a preventive disciplined lifestyle, it has far-reaching effects on both the mental & emotional planes...
take care,
vishal

Did you know that in China, traditional doctors get paid when the patient stays well and NOT when they're sick. THAT's the way to go...

Hiya again, yes I am aware of the fantastic past of some asian countries, primarily India & China.

I sort of read stuff on how modernism & industrialisation is destroying both the countries - which makes me ponder whether the elaborate systems from the ancient past will survive this onslaught or not.

I am currently based in one of its urban nightmares for the moment (bombay), and it is indeed terrifying.

Modern science is going in the wrong direction with trying to tinker with genes, etc - when what it should focus on is realising how the current society forms the basis for some serious psychological defects in children, which is why a disciplined life is so "un-cool".

Hmm, I had a question for ya - are the organic fruits in the US subject to artificial ripening? Because I am not sure whether the definition of 'organic' covers only the growing part of produce or if it extends to any post-processing too.

p.s. if this is all going off-topic, we can switch to email. (mine is there on my school site in the link)

I'm not sure about the organic standards for ripening, but I do think they use ethylene gas and thinkgs like that on non organic produce...

Yes, I am aware of the practices wrt non-organic fruit (that is the norm here too), which is why I have been trying to find out what's true for organic. I do not know whom I should ask.