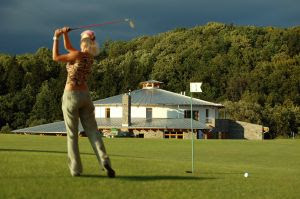 (Sorry if you like golf)
Man Fertility and I were just in Arizona, where it was so hot (our car thermometer said 125 degrees at one point) that we actually so wilted cacti. Yet, we also so tons of lush, rolling grassy golf courses (with fountains). But, just like when my mom and I got twin "allergic" reactions at a florist, something about the grass made me feel a bit funny. Could it have been the pesticides?

Among the big winners in Bush's proposed rollback of pesticide restrictions? The politically untouchable golf industry, where dangerous chemicals are par for the course AND bad for the ozone layer:

The toxic pesticide has a habit of affecting non-target organisms as well as the pests it seeks. Human exposure to too much of it can lead to death, respiratory failure, central nervous failure and permanent disabilities; pregnant women exposed to it risk fetal defects. And, according to the Environmental Protection Agency, "methyl bromide contributes significantly to the destruction of earth's stratospheric ozone layer" and for that reason, on Nov. 28, 2000, the U.S. government agreed to a 70 percent reduction of its use this year, with a complete ban to kick in by 2005.

The Bush administration, however, is considering applications for 56 exemptions from this ban and, according to press reports, is planning to grant many of these industries their wish...

One might be inclined to feel some sympathy for the Virginia Tomato Growers, the Sweet Potato Council of California or the Rice Millers' Association. They feed us. But golfers? Specifically, in its application (click here for a PDF copy; requires Adobe Acrobat) the Golf Course Superintendents Association of America wants EPA Administrator Christie Todd Whitman to allow its members to use, from 2005-2007, 734,400 pounds of a chemical so toxic and environmentally damaging it will be banned nearly everywhere else. This exemption is sought so the courses can continue to look pretty.

"Methyl bromide is used on golf courses when they resurface greens," explains GCSAA spokesman Jeff Bollig. "Greens are covered with a tarp sort-of material and they shoot the gas in -- it kills the existing grass so it can be replaced with a better strain."

And the EPA, according to some reports, appears inclined to grant the golf association its wish. Naturally, the environmental community is up in arms. "We don't think that methyl bromide should have a place on the farm, let alone the fairway," says Allen Mattison, spokesman for the national Sierra Club. "There is certainly a better solution than a substance that depletes the ozone layer and causes irreversible environmental harm."

The Bush administration, however, has been able to slowly roll back a series of such restriction in the past few years, with little notice, or outrage, from the public at large.

read more here or just stay away from golf courses...
Posted by GreenFertility at 6:10 AM

They should limit the use of those pesticide on golf courses.
I'm not sure if pesticide is really necessary in golf course which is mostly covered with grass.

Well, if they are using it to kill grass it must be acting as a herbicide as well.

My husband golfs but I won't let him take our kids with him even though they want to learn. It really bothers him that they use so many chemicals on the golf course. He worked at one for many years and always wanted to open a chemical-free (organic, if you will) golf course. It's possible but more work so they don't do it.

Great post. As for me and my family, we'll stick to miniature golf. No pesticides and a chance to win a free game on the last hole - what a deal!

Yes, someone needs to start a line of organic golf courses!! Plus, the people who live near golf courses get penalized.

Golf course is certainly not a good place for kids. With all the pesticides they are using, it's better for parents to take their kids to those miniature golf, as mentioned by paul.

Miniature golf is a different experience. But if families are bringing their children, why not? It better compared to the real golf course, considering this problem with pesticides that they are using.

I'm emailing this to my husband right away, who has been feeling the pressure to learn golf at work. Yeah, dontcha wish that all those businessmen could get the same joy with miniature golf! And funny, around where I live, the realtors always mark that as a plus if a property is near a golf course. However, growing up in Philadelphia, I do remember one golf course that I would always pass on my bike rides and it made me curious about the game. It was a public golf course! Not quite as pristine as the private ones I see on t.v. and in our neighborhood now, but how cool is that! I wonder if this Philly golf course was using pesticides. Yeah, I'd love to see a market for eco-golfing.

my family has a 27-hole executive golf course near ocean city, md. we are initiating organic systems, beginning with an entirely organic chipping green. i have been utilizing compost, and use garlic spray and cornmeal for pesticide/fungicide, as well as wood ash to refine the pH. it has been working surprisingly well, but i think golfers will need to be patient with 'less than perfect' turf to support organic golf initiatives.

That's great! Send us a pic and I'll post on the blog--