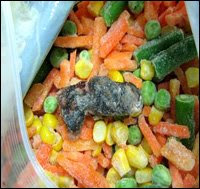 This story totally reminds me of the time I was living in Korea and the Korean FDA found e. coli in some meat imported from the U.S. The U.S., of course, REFUSED to believe some dumb Koreans with their obviously third worldy, inaccurate labs.

So the US FDA sent a whole team over to Korea to test the suspected meat, and Oops! the Magic 8-ball says....E. Coli. No apology or anything, just a quiet retreat.

Shortly thereafter, however, newly suspicious of American products, the news had one of those consumer stories where they showed in real time that insects and things would actually croak if you put them in a bag of American flour. I think it's partly a function of our pesticide overuse and partly a function of the U.S. dumping gross goods (banned pesticides and other fun chemicals, etc.) on other countries.

After that I avoided "Made in USA" the way we currently avoid "Made in China."

I'm sure the USFDA is going to say, "Well, that rat was organic, you should be happy!"

From the Korea Times English edition:

The Korea Food and Drug Administration (KFDA) said that it is investigating whether a substance found in a vinyl bag of a frozen vegetable product manufactured by Columbia Foods of the United States was a small rat.

The investigation follows a report by a consumer that a foreign body was found in a packet of ``Organic Mixed Vegetable,'' bought at a local discount chain store. The consumer filed a complaint with the store, which later reported the case to the KFDA.

The authority said it has secured the product and the substance, which looks like a small rat and is 4 centimeters long.

The latest finding of a foreign substance came days after the nation's largest snack maker, Nongshim, made a public apology for one of its best-selling items containing the head of a small rodent. The company shut down the snack production line and supermarkets are already removing them from their shelves.

At least, I'm sure the rat was organic. ;)
Posted by GreenFertility at 1:07 PM

Well, they say frozen veggies retain more of their nutrients than canned...maybe that's 'cause they add tiny animal proteins sometimes?

The dumping thing really ticks me off. We really should hang our heads in shame.