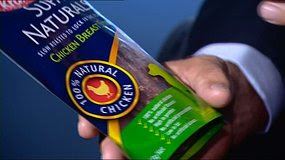 Another reason why I avoid even "natural" products if they are sourced in China...

The importer of a Chinese-made chicken dog treat has voluntarily recalled the product, after reports of kidney damaging illnesses in dogs around Australia.

The company KraMar has withdrawn Supa Naturals Chicken breast strips, which it says is one of Australia's highest selling dog snacks.

A statement issued by KraMar says the withdrawal is a precaution.

It says testing has been conducted on every shipment for bacteria and for the poison melamine, which has been connected with cases of kidney malfunction in pets overseas.

Researchers from the University of Sydney earlier connected a kidney damaging syndrome in dogs to the chicken snacks.

Dr Linda Fleaman says there are a lot of cases around Australia of the normally rare acquired Fanconi syndrome.

"The one thing that is common with all of the cases, is that the dogs have among other things, eaten a certain chicken treat that has been sourced in China," he said.

"Although we have no idea what the cause of this problem is, we are concerned there's a link between the feeding of the treat and the emergence of this clinical syndrome."

Posted by GreenFertility at 6:49 AM