If Malaria Is Big Money, Think about Fertility... 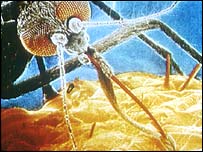 
I used to be the kind of person who felt that with drugs, food--anything given to you to put on/in your body, that you just have to trust them. Them being the manufacturers, the government safety agencies, the pharma companies. Of course they would never do anything that would be harmful--we depend on them fully, and they know that.

Unfortunately, this dependence is known and too often exploited for profit. The BBC recently ran an article on how the World Bank (now headed by Paul Wolfowitz, one of the original bomb-bomb-bomb, bomb-bomb-Iraq Bush-hawks, see Utne Reader's Wolfowitz Admits Iraq War Planned 2 days After 9-11) basically knowingly used its funds for obsolete and inappropriate treatments for malaria, then manipulated their own secret data to boast that


The authors of a study in the Lancet were suspicious of such seemingly-miraculous numbers, especially when the wrong kind of drug was used, and they thus requested--and were denied--access to the original data. They were forced to consult to official sources, and found a more appropriate and SAD result:

...According to India's Directorate of National Vector Borne Disease Control Programme, deaths from malaria rose [emphasis mine] in all three states in the 2002-3 period in question.

The Lancet investigation went on to accuse the World Bank "of supplying India with an anti-malarial drug, called chloroquine, at a cost of $1.8m, which it says is unsuitable for the type of malaria seen there and against World Health Organisation guidelines [emphasis mine]."

And concluded that "The bank wasted money and lives on ineffective medicines."

Basically, the World Bank was killing people with useless treatments, hiding data, then manipulating, distorting, and waaaayyyy over-hyping the false data they did release. And then the the best the WB could come up with to defend itself was the usual poopy pseudo-economic mealy-mouthspeak that India got "good value for [the] money."

Now, on to fertility: A doctor friend who works with infertile patients (many successful regaining fertility) often after they've been kicked out by their reproductive endocrinologists as hopeless cases, told me privately that, when doing pay-per-shot procedures such as in-vitro fertilization (IVF), that the docs can discern "good" eggs versus the "rotten" ones as they harvest, and it's not uncommon for them to purposely take out rotten ones for the first 1-2-3 cycles, then get the good one in time to not screw up their success numbers.

Consider this as you shove another non-food item of unknown provenance but labeled Chicken McNugget in your mouth as you think, Of course they would never do anything that would be harmful--we depend on them fully, and they know that. Then get the little "nutritional facts" booklet and see what's actually inside those buggers. Seems unthinkable--just like the Iraq War, that the World Bank would basically knowingly let people die.

Think of the doc harvesting the egg. A good doc takes out the good egg, a somewhat evil one could (I'm not saying will) take out a lousy one just to bring you in for another $10,000 procedure (hey, he's human, he's got kids in college!)...and there's no way to know. Unfortunately, this is human nature. It's a powerful position to be in, where someone else is kept in the dark...