Consume for the cause? 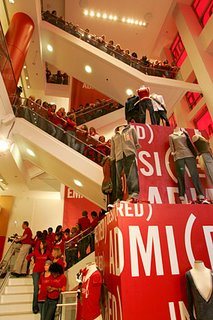 Yesterday we spoke of breast cancer, which made me think about how I never understood how buying some chemical-laden lipstick with a pink ribbon on it was supposed to help breast cancer.

Well, I was just in NYC to watch a friend unveil her new novel, and when walking around, even in the bowels of the East Village, I felt like all I saw were these "buy red GAP items to help Africa." Can consumption for a cause ever be good? I doubt it.

Thankfully, the Worsted Witch already has it covered (the pink stuff, too):

Product Red saves African lives: “This season, you can actually feel good if your bank account is running in the red.”

[U2’s Bono]** is bringing his good-faith efforts to the mass population, teaming up with the world’s largest clothing retailer, The Gap, to sell his “Product Red” clothing line. The Gap, itself a target of quite a few anti-sweatshop activist groups, is redeeming its image with Bono’s new line of t-shirts and jeans, some of which are made in factories in Africa in order to stimulate economic growth, and as much as fifty percent of the net sales of all Product Red items will go to purchase AIDS anti-retroviral drugs.

Product Red doesn’t stop at The Gap’s doors either. Apple has launched a Product Red iPod nano and Motorola a Product Red Razr phone, and Emporio Armani and Converse are also selling items under the label. Donations are made by each of these companies to provide AIDS medication.

I threw up this link partly for the crybabies who bawl about how the poor megacorporations JUST WANT TO BE LOVED. (Not that I care about them, because, trust me, I don’t.) But also mainly because my old grad-school roommate is a HUGE Bono fan of terrifying proportions and she would wallop me with a giant cannoli till I lost all consciousness if I didn’t give the man props. So this is for you, Maria. Because you’ve watched The Godfather trilogy far too many times for comfort and I’m afraid for my family.

In the place of anything resembling citizenship we have consumer choices, “innovation” and above all brand marketing, which is even now in Product Red being cast as some sort of corporate largesse. (”Isn’t it so great that the Gap and Apple would submerge their own brand identity,” glowed many a business page article). Shopping is sharing, and the unprecedented accumulation of wealth squares entirely with “ending poverty”—just ask Gates or Warren Buffet. In their world, fighting AIDS somehow never seems to query how Europe and the US underdeveloped Africa and how the continent’s abundant resources are still exploited by the world’s wealthy.

And as this smart blogger points out, the AmEx board is stacked with former and current CEOs and directors of major Pharma companies who waged a genocidal campaign against the generic production of AIDS drugs. At 1 percent of AmEx Red profits, absolution comes cheap these days, don’t it?

** Also, Bono's the one who jets around in a football-field sized plane, which I think consumes something like the equivalent of the yearly gas supply of a 100 Hummers of something like that for one little trip to Africa. I do admire the man, but ask him, please think about that!
Posted by GreenFertility at 3:05 PM

I am sooooo tired of their private jets! And how everyone seems to think I should worship celebrities because they tend to support democratic causes. When they start flying coach, or even business class, then I'll be a little more open to their causes. And you and Witch are right - the world owes Africa much more than this drop in the bucket.

You know,,, now that i think about it how do they pay for everything (the costs for the stuff not bought)????? I have a feeling that most of the money goes towars the making of the products rather than the real issue. am i making sense?
maybe we should be sending them these things rather than buying them and knowing only like half a dollar will go to the cause which will then be used to pay the companies back for their efforts. thats how i see it works. i am probably wrong but o Frickin well.
trust me you are not getting 'soft' in your old age... if you were I dont think i would know what to do (^_-)

Good points Marie. One of the scary aspects of the 'marketing of moralism' is the ability to compartmentalize the consumer's vision and create the high-packaged, glossy, tiny band-aid to cover the massive wound left by first world consumption.

One could say that at least it gets people thinking about where their dollar is going, which I think can always be a good thing to some degree, but unfortunately, the message gets lost in the quick fix. "If I buy this red nano, to go along with my two other iPods, I am saving the world..."

There are times when companies add to the retail price in order to divert funds to charitable organizations, and it is curious to me how we are often willing to pay more if we know we are giving to a cause. I don't know if that is the case here, I doubt it with corporations as big as these...

Yeah...I'm not one to legislate morality, but in the specifics of Madonna's case, since the poor child's father is LIVING, why not a micro-loan/grant so he CAN raise his own child? If she truly has the best interests of the child at heart...