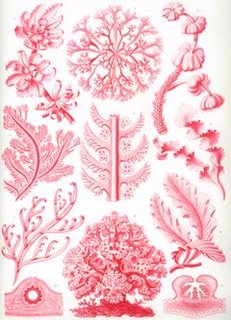 The Triple Helix is a magazine of young scientists/med students/etc. that's published here at Brown, and I find it really well done and chockablock with fascinating info, such as this tidbit about carageenan, a derivative of red seaweed and a natural binder of lots of health foods and cosmetic products:

In a recent study by the National Cancer Institute, researchers have found that the common food additive carageenan is effective in protecting against HPV (human papillomavirus) infections and cervical cancer...

Shown to cause cervical cancer in humans, the HPV virus attacks cells by attaching to proteins on the cellular surface, chemically gaining access to the cells of the cervix. Carageenan was found to prevent infection by inhibiting the virus from attaching to cells, working at concentrations 100-times lower than the best viral inhibitors currently employed...

Carageenan has been shown to provide protection from other diseases as well, including the herpes simplex virus (HSV), the virus that causes cold sores. Used as a thickener in household products like yogurt and toothpaste, carageenan is safe and readily available, and scientists claim that carageenan could become one of the best preventatives available to block against the transmission of sexually transmitted diseases.

Nahhhh, let's just give everyone a vaccine instead. And poor people? Screw 'em!

Anyway, Korean folklore has seaweed in general as being good for you. Some studies have shown it inhibits tumor growth, and at the very least, it has lots of iodine for the old thyroid and trace minerals--don't forget, you go back far enough, we probably all crawled out of the sea.

Dulse is one red seaweed that's pretty tasty (I'm not sure it's EXACTLY the one carageenan is taken from, but it's in the same family). I get most of my seaweed from Maine Coast Sea Vegetables, because their products are organic AND they test for heavy metals!

Aaaaaand, it's associated with fertility (which could be because the iodine helps the thyroid, which helps the hormones...you get the picture) From Susun Weed:

Dulse, blood mystery of the sea. Dulse, daily, is a wonderful ally for strengthening women. With her dark purple-red color and her ever-changing shape, dulse is as red and changing as a woman's moon time. She is the image of uterine power and mystery. With her beneficial yeasts, proteins, and minerals, dulse is an optimum nourisher for uterus and nerves. -Susun S. Weed, Healing Wise
Posted by GreenFertility at 6:10 PM

What are the healthiest winter skin products?

Some folks can eat just about anything. Some people might have no problem producing a tall glass of homemade soy milk, then converting it to chocolate milk by adding the following ingredients: Three teaspoons of sugar. One teaspoon of chocolate powder. Two tablespoons of Vaseline petroleum jelly. The Vaseline might produce gastric distress, and the soy milk drinkers would erroneously conclude that they are "allergic" to soy. Some people do not experience gastric discomfort caused by the Vaseline-like food additive, carageenan. Many people do.

Carageenan is a commonly used food additive that is extracted from red seaweed by using powerful alkali solvents. These solvents would remove the tissues and skin from your hands as readily as would any acid.

Carageenan is a thickening agent. It's the vegetarian equivalent of casein, the same protein that is isolated from milk and used to thicken foods. Casein is also used to produce paints, and is the glue used to hold a label to a bottle of beer. Carageenan is the magic ingredient used to de-ice frozen airplanes sitting on tarmacs during winter storms.

Carageenan is about as wholesome as monosodium glutamate (MSG), which is extracted from rice, and can equally be considered natural. Aspartame (NutraPoison) is also natural, as it is extracted from decayed plant matter that has been underground for millions of years (oil). So too are many other substances such as carageenan that can also be classified by FDA and USDA as wholesome and natural food additives.

Just because something comes from a natural source does not mean that it is safe. The small black dots in the eyes of potatoes contain substances that are instantly fatal if eaten. Got poison? You will if you eat the black dots on the "eyes" of potatoes.

Carageenan is a gel. It coats the insides of a stomach, like gooey honey or massage oil. Digestive problems often ensue. Quite often, soy eaters or soy milk drinkers react negatively to carageenen, and blame their discomforting stomachaches on the soy.

In order to get more information about carageenan from a scientist, I spoke with one of America carageenan experts, Joanne Tobacman, M.D. Dr. Tobacman teaches clinical internal medicine at the University of Iowa College of Medicine. I explained to Dr. Tobacman that I rejected animal studies (we discussed valid concerns about animal research, and why they never produce reliable results for humans). I requested evidence of human trials that might show carageenan to be a danger for human consumption.

Dr. Tobacman shared studies with me that demonstrate that digestive enzymes and bacterial action convert high weight carageenans to dangerous low molecular weight carageenans and poligeenans in the human gut. These carageenans have been linked to various human cancers and digestive disorders. Again, I remind you that Tobacman's evidence and conclusions are based upon human tissue samples, not animal studies.

I will cite additional information from four studies:

In her 1997 publication (1), Tobacman studied the effect of carageenan on the growth of cultured human mammary epithelial cells over a two week period. She found that extremely low doses of carageenan disrupted the internal cellular architecture of healthy breast tissue, leading her to conclude:

"The widely used food additive, carageenan has marked effects on the growth
and characteristics of human mammary myoepithelial cells in tissue cultures
at concentrations much less than those frequently used in food products to
improve solubility."

"These changes included prominence of membrane-associated vesicles that
coalesced to form unusual petal-like arrays...and development of stacked
rigid-appearing inclusions in the lysosomes that arose from the membranes of
the petal-like arrays and from smaller, dense spherical bodies that formed
clumps."

In reporting a historical perspective, Tobacman revealed that carageenan has been found to destroy other human cells in tissue cultures, including epithelial intestinal cells and prostate cells. She concludes:

"The association between exposure to low concentrations of carageenan in
tissue culture and destruction of mammary myoepithelial cells may be
relevant to the occurrence of invasive mammary malignancy in vivo and
provides another approach to investigation of mammary carcinoma."

Tobacman's third paper (3) explored the increased incidence of mammary carcinoma to the increased consumption of stabilizers and additives such as guar gum, pectin, xanthan, and carageenan. While no relationship between the either above named additives and cancer was observed, carageenan showed a strong positive.

"Acid hydrolysis (digestion) leads to shortening of the carageenan polymer to
the degraded form, poligeenan. It is not unreasonable to speculate that
normal gastric acid...may act upon ingested carageenan and convert some of
which is ingested to the lower molecular weight poligeenan during the actual
process of digestion. Also, some intestinal bacteria possess the enzyme
carageenase that degrades carageenan."

Tobacman is currently preparing and characterizing low molecular weight poligeenans (carcinogenic)that have been extracted from human digestion modalities. Her yet-to-be published data suggest that carageenans are dangerous for human consumption.

My advice: Read labels. If there is carageenan in a product, select an alternative.

This morning, I checked my local supermarket (ShopRite, Emerson, NJ) to see which soy milk manufacturers added carageenan to their formulas.

The largest selling soy milk in America is SILK. Do I pick on the industry leader? Damned right I do. SILK sets the standard. You deserve to know the truth. Just for the record, when SILK changes their formula they will become my hero. In my opinion, SILK tastes better than any of the commercially available soy milks. Unfortunately, consumers sacrifice good health for good taste. That is not a fair trade, particularly for our children.

THESE COMPANIES DO NOT USE CARAGEENAN

VitaSoy does not have carageenan! they use barley flower as a thickener. 8th Continent does not use carageenan either. Their choice is to use cellulose gel and soy lecithin to create a smoother soy milk.

On the shelf (non-refrigerated), I found Rice Dream. They do not use carageenan. They use xantham gum. Soy Dream (made by Imagine Foods) does not use it either. Their emulsifier is rice syrup. Eden Soy does not use it. They use barley extract.

Do a little experiment. Drink a quart of SILK. Pay careful attention to your carageenen-induced tummy ache and intestinal discomfort. Many consumers unfairly blame that on soy. Now you know the truth. Drink a quart of VitaSoy, 8th Continent, Soy Dream, or Eden Soy, and you will not get the garageenan-blues.

Do you know of a friend or family member with one or more of these milk-related problems? Do them a huge favor and forward the URL or this entire file to them.

Do you know of someone who should read these newsletters? If so, have them send an empty Email to notmilksubscribe@yahoogroups.com and they will receive it (automatically)!

Thanks for the info. Do you think the plain seaweed would cause such problems? Asians have been eating seaweed for thousands of years.

Wonderful to hear! I love carageenan, and it's great to hear that it's doing more good than just making for happy taste buds! Thanks for the share :)