One of the things Michael Pollan (my new hero!) suggests for healthier eating, besides never eating something Grandma wouldn't recognize as food, is to follow "folk" food traditions because if they'd lasted 5,000 years, there must be something to them.

Well, I grew up im the north woods of Minnesota, where there aren't any Koreans (or other people of color in general), so it was a bit difficult for my parents to get kimchi until the late 70s when a tiny market opened in St. Paul (4 1/2 hours away...). But once they got it, they stockpiled a bunch of it, always being careful to hide it if anyone came over, etc. But they ate it religiously with meals, and after a meal out, my dad would rush home (esp if it was a typical, fatty, northern Minnesota meal--what other kinds are there?) and eat a bunch of kimchi, declaring he hadn't eaten unless he'd had kimchi.

So of course I've had this "kimchi helps digestion" thing drilled into me, and it wasn't until recently that I found out it actually DOES have enzymes in it that help you digest food, wouldn't you know? And nappa cabbage is a natural source of lactobacillus probiotics, including the unusually hardy strain, l. plantarum. You can read all about the scientific validity here at this Cornell website, or you can just take my word for it. 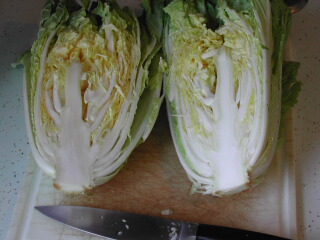 So get 1-2 heads nappa cabbage (also called Chinese cabbage) and please try to get organic because cabbage can be very pesticidey. 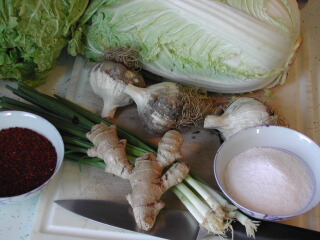 Next assemble the following 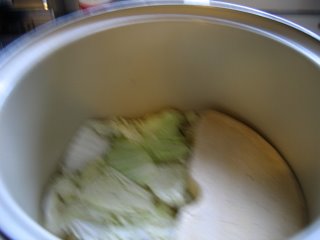 Wash and cut up the cabbage into bite sized pieces. Then sprinkle it in a large pot, adding salt between the layers, kind of like you're salting a roast or something.

Then put something heavy on top of it: clean plate, I have a clean stone from our sauerkraut maker.

Leave it overnight to squish out the water. Cabbage should be limp in the morning. 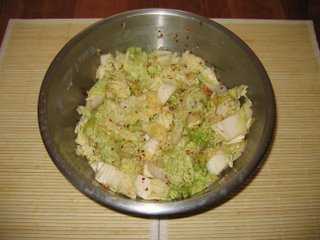 Taste the cabbage--it should be pleasantly salty. It's it's too-too salty, give it a quick rinse.

Stick it all in a bowl and add matchstick veggies . Mash the cloves of garlic and ginger (to taste) through a garlic press, food processor, or mince (I think mashing makes for better taste), add hot pepper.

My aunt uses sugar to get the cultures going, I use a dab of honey. You don't need to use anything at all. Mixing it with the hands is supposed to add a nice "vibe" to the whole thing. I always mix by hand. 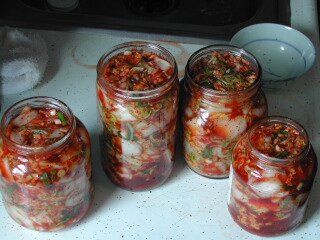 Put the finished product in clean glass jars (the beauty of it, you don't need to sterilize, like you do for canning--the garlic and hot pepper keeps everything nice and clean). The color will depend on how much hot pepper you put in. The kimchi here is what it normally looks like (yum!). The picture of my cabbage in the bowl (previous picture) looks "weak" because I put in less pepper because I was making it for my son and didn't want the school calling DCYF on me for torturing my child (believe me, they already talk about the weird mommy who doesn't let her kid have ice cream).

Make sure you press all the air bubbles while you are packing it, so the cabbage will be immersed in juice. Swish about 1/4- 1/2 cu water around the bowl you made the kimchi in to get all the spices and stuff from the sides (recycling! reclamation!) and pour the mixture into the jars so that you have enough fluid. Leave about an inch, but no more, at the top, the close the lids. I put the jars on a tray because--if you did it right--in the fermentation, liquid might be pushed out the top of the jar.

Leave the whole thing out like a science project for 3-4 days and taste it. It should not be moldy or putrid, it should just taste pleasantly fermented--if tastes off (I've only had this happen once) it's because the stuff wasn't packed/immersed tightly enough or not enough salt/garlic. I know leaving food out can seem "unclean," but clever peoples learned to survive before Sub-zero refrigerators were invented**. Refrigerating it too soon will kill or slow the probiotics, so...chill out.

Posted by GreenFertility at 7:03 AM

Can't wait to make it Marie! Thanks for the recipe.

Can I use the "crushed red pepper" I already have in my cupboard, or do I need to get "red pepper flakes" specifically?

I'm supposed to remind you to post that story about Meg Ryan and her Chinese baby! :) Dish!

Yes, any red pepper flakes will do--cayenne, etc. However, the pizza-style red pepper flakes often have seeds in them. Esthetically, the goshukaro (pictured) is just ground up hot pepper an dmakes for a prettier color. I often dehydrate and grind my own...but you don't also have to be such a nut. Gochukaro is easily available at any Korean grocery.

Thanks for posting this recipe! Napa cabbage is just now in season where I live. I hope to try the recipe out soon.

I assume it should be stored in the fridge. How long do you think it will stay good? (I have some Korean relatives by marriage, and they all have dedicated fridges for their gallon jars of kimchi. I doubt I will be able to rival their consumption rate, though it would probably be good for me if I could!)

Oh goody, that the cabbage is in season must be why w've actually gotten some here.

The beauty of naturally fermented products is that they don't (like, say pastuerized milk) go bad, they just get more fermented. That said, I wouldn't keep it a year. I'd try to eat it in a month...or two. Good lucK!!!!

Mmmm, I made this and it turned out pretty well. I think next time I'll use less red pepper though (cough, cough) !

Can you recommend any books out there on making fermented foods? I have a great book on raw food but she doesn't get very detailed in that arena (Living Cuisine: The Art and Spirit of Raw Foods.)

Actually, all the cool food I know how to make doesn't come from books :) May do a pickled garlic recipe this spring :)

You should check out "Wild Fermentation: The Flavor, Nutrition, and Craft of Live-Culture Foods" by Sandor Ellix Katz. It's a very quick read with many recipes for all sorts of fermented foods, including kimchi.