Kimchi's really good for you, here's why 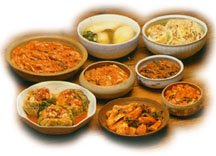 Not to totally belabor the point, but kimchi is one of the world's superfoods.

Here's some highlights from a very article on the LifeinKorea website:

Kimchi has played a role as an important source of nutrients in fermented vegetables during the long winter months. It has different kinds of nutrients based on materials and the level of fermentation. Usually, the materials used in making kimchi have few calories and low levels of sugar, but contain high amounts of fibers, diverse vitamins (especially vitamins A and C), and minerals (such as calcium and iron). The nutrients produced during fermentation (lactic acid bacteria and acetic acid) help protect against cancer and germs.

The fiber in cabbage is not a nutrient, but it aids digestion, allows smooth movement of food through the intestines, and helps prevent constipation and intestine cancer. Red chili peppers and garlic help to lower blood cholesterol and aid in blood clotting. The nutrients and activities of the various micro-organisms produced during fermentation are also very beneficial to the human body

Lactic Acid Bacteria
The well fermented kimchi has more lactic acid bacteria than yogurt. This bacteria isknown to be especially good for the intestines and has anti-germ functions.

Acetic Acid
Acetic acid is produced differently according to the materials used, fermentation temperature and period, and level of salt. The flavor depends on the level of acetic acid. Overall, kimchi that is fermented with less salt at a low temperature has a better taste.

Amino Acids
The special flavor of kimchi depends not only on acetic acid, but also carbon gas, condiments, and amino acids. Amino acids are produced by breaking down protein in pickled fish paste and oysters. Researchers have found that kimchi contains 17 different kinds of amino acid.s

Vitamins
Kimchi has high levels Vitamin B, C, and Beta Carotene. The levels of Vitamin B1 and B2, and B12 double after a 3 week-fermentation period.

If you still want to read more about it: http://www.lifeinkorea.com/culture/kimchi/kimchi.cfm?xURL=nutrition

STAY TUNED FOR AN EASY VEGETARIAN RECIPE!
Posted by GreenFertility at 7:27 AM

I love kimchi. There is an incredible Korean restaurant in Brattleboro, VT called Shin La. Have you ever been? Every time I am driving thru there I hit it. Bi Bim Bab, Bool Ko Ki, spinach salad, cucumber salad, and lots of kimchi... delish!

p.s. am having bi bim bap for dinner tonight. ya-hooooo! Thanks for writing and keep eating kimchi!!!!

It is a must!
-Eco Chick Kim

Thanks Eco Chick Kim--you're the best!

p.s. my bi bim bap came with spiiii-cy cucumber salad last night. Yowza! it was yummy. Stay tuned for the recipes. I plan to make it and take pics--it's very hard to do otherwise. I have to see if Whole foods has Chinese cabbage, first -- because of the global-warming drought out in Cali they haven't had any all winter :(