Most humans lose their ability to digest milk as they get older, which is thought to be an adaptive behavior because milk--despite the claptrap the ads with the milk moustaches tell you--isn't that great for you.

When we put our kid on a dairy-free diet, even though we saw immediate results on the diarrhea and tummyache front, our pediatrician got on our case: WHAT ARE YOU DOING???? THAT'S DANGEROUS!!!! HE WON'T GET ENOUGH CALCIUM!!!! To which we replied, How do you think cows get their calcium? The larger proportion of the world does not drink/eat milk. Koreans have survived over several thousands of years eating 800 vegetables and myulchi, these teeny tiny fish with teeny tiny bones.

There is also INULIN. It's a carbohydrate found in asparagus, leeks, garlic, onions, artichokes, banana and chicory (n.b. chicory is also packaged a healthy coffee substitute for those who want to avoid coffee for fertility reasons...). An onoing study at the Baylor College of Medicine's Children's Nutrition Research Center found that inulin helped growing kids absorb more calcium and build more bone. Our child luckily already eats many of these foods and he's even taller than some of his older cousins, even with all the nasty spinal surgery to remove his cancer, which also removed some of his vertebrae and, we were told, will curtail his height.

Here's what MY gluten and dairy free kid's t-shirt says (there's a pic of a rice cooker on the back): 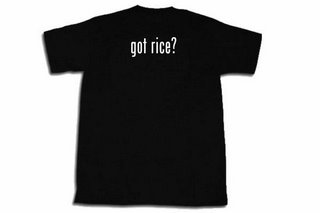 Posted by GreenFertility at 10:05 AM

Wow, Your son has been through alot. To be doing so well is amazing. You are really in tune to your child and his life. Good Job. Most parents listen to the doctors and are constantly worried about how to take care of their children. Being in the pediatrics office and hanging out behind the desk you see alot of parents who are lost.
can't wait to see your next post!

Thanks Christina, appreciate you taking time to write. We used to let J get ice cream after all his awful hospital procedures, but no more :( That poor kid hasn't had milk or sugar or all sorts of stuff for over 3 years now...he IS healthier though!

Hi
May I suggest checking out this website http://www.realmilk.com/why.html
A subsidiary of the westin a price foundation, it tells the story of why today's milk is indigestible and devoid of nutrition, the fallacy of pasteurization and the value of lacto fermentation and raw milk products

Thanks, Agnes, for the link-yes, pasteurized milk putrefies and goes bad (and does the same in our bodies, ick) while raw milk becomes delightfully fermented. In Korea people drink this weird fermented milk drink called Calpis.

Fun fact: Pasteur did NOT intend Pasteurization to be used for milk, but for wine...

Just had a severe reaction to inulin in sun chokes. Severe abdominal cramping, vomiting & diaherra for six hours. Might be great for good bacteria but also BAD bacteria. Still not right after two months. Doctors not interested, said how do I know it was that. I am a Celiac so very careful about what I eat. No wonder only one case of anaphylactic shock from inulin has been reported. And now they are adding it to our food source.
JEP

THanks for the comment--did you cook the sunchokes? Flatulence is unfortunately VERY common in raw sunchokes!