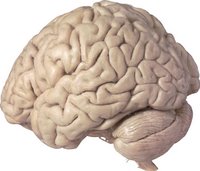 (photo of an actual human brain is courtesy of BODIES...The Exhibition)

While I was in NYC to watch my friend operate, I also took my little reporter's notebook to
BODIES...The Exhibition, which features preshttp://www.blogger.com/img/gl.link.giferved cadavers, with many of their organ systems on display.

They also had some yummy exhibits of pathologies, like a smoker's lung. Plus, a couple truly amazing cross-sections of some hu-u-u-u-ge goiters, which are caused when the thyroid does not receive enough iodine. Because of iodized salt, goiters are not particularly common today. However, those who use SEA SALT should probably make sure to eat something else that contains iodine, like seaweed. Thyroid, as always, is a key player in fertility.

I was thinking of that exhibit as I was experimenting with a cashew cheese recipe for which I substituted dried seaweed bits to provide a nice salty flavor instead of salt. Seaweed happens to be a favorite snack of Koreans everywhere (when roasted and salted, even better than potato chips!) as well as mortal enemy to the disfiguring goiter.

This is not the most appetizing segue, goiters to cashew cheese, but the recipe, if successful (still fermenting), shall be posted soon. About the kimchi recipe: because of global warming (this is what the clerk at Whole Food said, honestly!) causing some drought in California, there's a real lack of organic nappa cabbage [n.b. cabbage is notoriously pesticidey--it would kind of negate the health benefits of kimchi to use non-organic, I think]. I know some readers are patiently waiting for the recipe...and I am, too. Kimchi-making is a little tricky, like artisanal cheese, so I plan to post step-by-step photos. Hope they get some cabbage, soon--it's definitely fermenting weather. Stay tuned!!!
Posted by GreenFertility at 9:44 AM