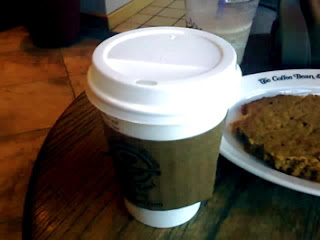 The jury's still out on coffee and fertility, but the more I look into it, coffee is not as bad for you as people think (it could be the icky pesticides and the dioxin-y filter--free trade organic French press for me, please)--its been shown to help regulate insulin levels, prevent gout, and now look at this is from the Journal of Neurology Neurosurgery and Psychiatry:

People who drink coffee are less likely to develop an involuntary eye spasm called primary late onset blepharospasm, which makes them blink uncontrollably and can leave them effectively ‘blind’, according to a study published online ahead of print in the Journal of Neurology Neurosurgery and Psychiatry.

The effect was proportional to the amount of coffee drank and one to two cups per day were needed for the protective effect to be seen. The age of onset of the spasm was also found to be later in patient who drank more coffee – 1.7 years for each additional cup per day.

...‘The most obvious candidate for the protective effect is caffeine, but the low frequency of decaffeinated coffee intake in Italy prevented us from examining the effects of caffeine on blepharospasm.

They suggest that caffeine blocks adenosine receptors as has been proposed for its mechanism in protecting against Parkinson’s disease.

The authors estimate that people need to drink one to two cups of coffee per day for the protective effect to be seen.

Click here to view the paper in full: http://press.psprings.co.uk/jnnp/june/jn119891 press release.pdf
Posted by GreenFertility at 7:14 AM

A lot of things that modernism cant resist have both good & bad parts. But I do not understand the mindset about why one should embrace the bad parts to get a kick out of the good?

Strange are the ways of the "modern" educated mind which will give any excuse to consume what it must :-)

You know, I don't really need a reason to enjoy coffee! I figure this, as with all foods and drinks, can be enjoyed as long as it is in moderation. And that seems to be working nicely. So far, anyway.

That's good news. Another reason for us to enjoy a cup of warm coffee.

I thought drinking coffee for the purpose of staying up late was producing stress to our eyes and might cause some long term effects.