Cloth to clean up the Mercury in your CFLs 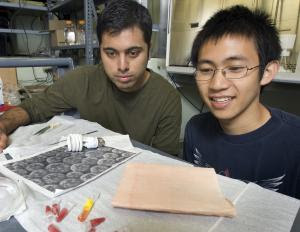 Compact flourescent lights, CFLs have been a point of contention among some environmentalists including myself. I tell anyone who'll listen that CFL's aren't the BEST idea since they contain mercury and have a recycle rate of around 2%--which means 98% of them are getting broken, thrown into landfills, thereby releasing Hg into the air.

We use LEDs (light emitting diodes), which are more expensive, but the light is nicer, too.

Anyway, always love to see what those clever Brown students are up to: they invented a cloth to mop up the mercury after you break your CFL. Doesn't make me feel better about compact flourescents, but I admire their cleverness.

p.s. the secret mercury absorber is selenium--make sure you get enough in your diet! Brazil nuts are one of the natural sources with the highest amounts.