Hollow Assurances of Safety from FDA on Bisphenol-A 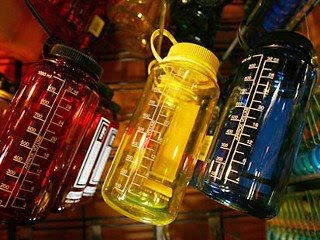 Yes, I'm no-fun-at-the-party person excoriating my greenie friends over CFLs (mercury!) and most recently, bisphenol-A, the stuff they put in hard plastics INCLUDING BABY BOTTLES.

My friends and family all thought they were being so green and clean and I kept telling them NOT to use Nalgene bottles. The FDA said the amoung of bisphenol-A (which causes cancer, infertility, diabetes, etc., in animal studies) isn't harmful, based on studies. Of course, whenever the FDA says ANYTHING is okay, I immediately assume the opposite. And whose studies? Plastic makers' studies! The government's own agency is disputing the FDA's findings as well. Stay away from hard plastics, including cans that are plastic lined.

p.s. Rock the Vote! Vote Democrat if you want to vote the party that favors more oversight into these kinds of things (Republicans will sneer and say Dems want are for "more regulation." Since when has this, and caring for the poor, been so laughable???)

From the Milwaukee-Wisconsin Journal Sentinel:

Ignoring hundreds of government and academic studies showing a chemical commonly found in plastic can be harmful to lab animals at low doses, the Food and Drug Administration determined the chemical was safe based on just two industry-funded studies that didn't find harm.

And from the NYtimes:

Panel Faults F.D.A. on Stance That Chemical in Plastic Is Safe

A scientific panel has issued a blistering report against the Food and Drug Administration, saying it ignored important evidence in reassuring consumers about the safety of the controversial chemical bisphenol-A.

You can use our info

ANSWER TO SECRET QUESTION: soylent green
Posted by GreenFertility at 5:29 AM