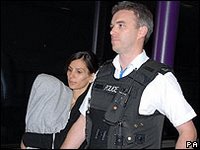 In an earlier post I wrote about how according to the Evan B. Donaldson Adoption Institute, Angelina Jolie's adoption of a child from Ethiopia caused a mini-run on Ethiopian babies. Not to mention her back-to-the-primeval birthing in Namibia (well, with her OB very un-environmentally being flown in from L.A.) made fellow-celebrity Brittney Spears look into giving birth in that African country as well. 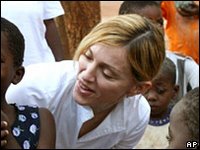 So now Madonna has adopted from Malawi:

The baby arrived at London's Heathrow airport at 0630 BST, despite claims by some charities that the rules on adoption have been bent for the star.

A statement from the star's publicist confirmed Madonna had been granted an interim adoption of the child.

The decision by a Malawian court gives the singer and her husband, film-maker Guy Ritchie, temporary custody of 13-month-old David Banda for 18 months.

A group of charities in Malawi had tried to stop the adoption, claiming it was unlawful because Madonna has not lived in the African country...

...The boy's father, Yohame Banda, has agreed to the adoption.

"What I want is a good life for my child," he said.

It's disturbing that the child still has a living parent, not to mention extended family. The whole first world/third world implications of this are inescapeable. I think it probably has to do with how, unlike, say, the already-damaged American child (perhaps in foster care?), the cute UNICEF-type baby being infinitely malleable and capable of reinvention (and who better to be his mother than the champion chameleon Madge herself?)

blech to madonna...i'm in the middle of an internat'l adoption and this time round it's takin' forever...we just got refingerprinted, will probably have to re-do all our US-side INS stuff (more $$ for the govt), and still we wait...but the thought that the father is there in malawi...disturbing...

This is indeed disturbing in so, so many ways.

It's almost impossible in this case to see anything but a quest for personal gain - good publicity for Madonna, undoubtedly dollars for this little boy's father.

From a former foster child and current child advocate,

I wish more celebrities would take a look at the American foster care system... the increasing rate of child deaths and overcrowding of children in homeless shelters in Las Vegas, for example...

I know I am in no position to judge, as I am considering adoption from Korea myself...but this whole thing so smacks of white-rich-celebrity privilege: i.e., I, Madonna, can just go pick out whichever cute African boy I want, )(*$# the family. Not to mention the materialistic, and I-wanna-be-cool-like-Angelina-Jolie vibe. It is, to me, just so eeeeeek.

As I commented on a different blog, I know some fantastic white parents of adopted children of color (no names, ahem), but the whole first world/third world aspect is still gonne be with us.

Thank you so much for that comment. I will infinitely respect any celebrity (hello, George Clooney?) who would, say take in an older foster child, or say an orphaned child of a relative, or any child whose need for a home drives the adoption, not the parent's need for the child/exotic souvenir/status object.

I'm another one who thinks about adoption but I don't think my desire to have a family, or any infertility issues that I have give me the right to "do a Madonna". Funny, Madonna seems so obsessed with this child and adopting from Malawi that it seems she doesn't even care that it's giving her bad publicity. I find this very creepy and a cautionary tale for me if I do go forward with adoption.

Amen! I couldn't have said it better. It also makes me very uncomfortable that Madonna is imposing her religious beliefs on Malawi.