There was a recent story on the CBS Early show about a *10* year old being treated for breast cancer. As a society, we need to be thinking about the toxins we are exposing ourselves to daily, and--this is a big one--how toxins interact with and often potent iate each other. So far, government scientists have been loath to investigate this area and prefers to do the single-toxin testing, which of course is easier but less telling.

Anyway, the conventional wisdom on lung cancer was that you needed to be exposed to particulate matter for a long time for damage to occur. Turns out just 3 days can start to damage your DNA. Food for thought (from Newswise, the journalists'-only site):

Newswise — Exposure to particulate matter has been recognized as a contributing factor to lung cancer development for some time, but a new study indicates inhalation of certain particulates can actually cause some genes to become reprogrammed, affecting both the development and the outcome of cancers and other diseases...

Researchers enrolled 63 healthy subjects who worked in a foundry near Milan, Italy. Blood DNA samples were collected on the morning of the first day of the work week, and again after three days of work. Comparing these samples revealed that significant changes had occurred in four genes associated with tumor suppression.

“The changes were detectable after only three days of exposure to particulate matter, indicating that environmental factors need little time to cause gene reprogramming which is potentially associated with disease outcomes,” Dr. Baccarelli said.

“As several of the effects of particulate matter in foundries are similar to those found after exposure to ambient air pollution, our results open new hypotheses about how air pollutants modify human health,” he added. “The changes in DNA methylation we observed are reversible and some of them are currently being used as targets of cancer drugs.”

Trouble Getting of Staying Pregnant?

If you have trouble getting or staying pregnant, especially if you already have any underlying immune problems: lupus, arthritis, asthma, thyroid, etc., you might want to check out the work of the late Dr. Alan Beer (see all the testimonials here). Dr. Beer's work is being carried on in his clinic (and you can do much of it long-distance).

I wrote up a whole article on what it entails at Fertility Authority. Check it out here.
Posted by GreenFertility at 4:26 PM 1 comment:

You know I recommend all sorts of herbs. Well, here's a very interesting one that's helped our autistic child. Anyway, Double-X is a spinoff of Slate, and it's a great magazine, so check it out:

Leave comments if you are so inclined...
Posted by GreenFertility at 6:43 AM 1 comment:

The Story of Stuff 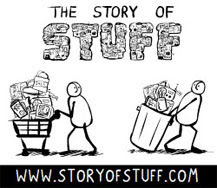 This woman is an ex-Greenpeace employee and she's put together a nifty animated video outlining the toxic effects of our consumer society. This is amazing--takes an expansive holistic view of our entire consuming/waste cycle--but takes only 20 minutes to watch. You'll be mesmerized. Make your kids watch, too (if they haven't already made you watch). She includes a lot of straightforward, unvarnished facts of why our consumption stream is so damn full of toxins.

Makes me feel that I need to do more than just turn to post-consumer places (Salvation Army) for my clothes. We need to rethink our whole way of life!

Oh, and plus it's put out by the same folks who brought us the Meatrix. Click here.

Not surprising in the least. But something to be aware of. Most cancer diagnoses, not only come with a huge emotional shock, but with pressure to hurry and "do" something. The best thing might be to stop and take a deep breath, then do some real research, including into alternative remedies. What the doctor recommends may or may not also contain motivations that not include the best interests of the actual patient--you.

Newswise — Nearly one-third of cancer research published in high-impact journals disclosed a conflict of interest, according to a new study from researchers at the University of Michigan Comprehensive Cancer Center.

The most frequent type of conflict was industry funding of the study, which was seen in 17 percent of papers. Twelve percent of papers had a study author who was an industry employee. Randomized trials with reported conflicts of interest were more likely to have positive findings.

“Given the frequency we observed for conflicts of interest and the fact that conflicts were associated with study outcomes, I would suggest that merely disclosing conflicts is probably not enough. It’s becoming increasingly clear that we need to look more at how we can disentangle cancer research from industry ties,” says study author Reshma Jagsi, M.D., D.Phil., assistant professor of radiation oncology at the U-M Medical School.

The researchers looked at 1,534 cancer research studies published in prominent journals. Results of this current study appear online in the journal Cancer.

“A serious concern is individuals with conflicts of interest will either consciously or unconsciously be biased in their analyses. As researchers, we have an obligation to treat the data objectively and in an unbiased fashion. There may be some relationships that compromise a researcher’s ability to do that,” Jagsi says. 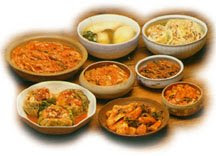 Good news for kimchi lovers. From the BBC;

Scientists have discovered the key to the ability of spicy foods to kill cancer cells.

The research raises the possibility that other cancer drugs could be developed to target mitochondria.

The study showed that the family of molecules to which capsaicin belongs, the vanilloids, bind to proteins in the cancer cell mitochondria to trigger apoptosis, or cell death, without harming surrounding healthy cells.

Read more here.
Posted by GreenFertility at 7:19 AM 2 comments:

Okay, you know how I feel about hormonal contraceptive (don't do it), but the CONCEPT of men taking responsibility is one I can agree with. Also, I would be curious what the cumulative effects of women being the ones practicing the heavy hormonal, pesticidey (nonoxyl-9, etc.) contraception over many years are?

A male contraceptive jab could be as effective at preventing pregnancies as the female pill or condoms, work shows.

In trials in China only one man in 100 fathered a child while on the injections, the Journal of Clinical Endocrinology & Metabolism reports.

Six months after stopping the jabs the men's sperm counts returned to normal.

Family planning campaigners welcomed the news and said they hoped an injection would give couples more choice and enable men to take a greater share of the responsibility for contraception.

Posted by GreenFertility at 5:56 AM 2 comments:

With a little help from my Tarot

The fertility journey, for many people, leads to a spiritual as well as a physical healing. I know I'm grateful for "learning outside the box," an expanded idea of what the world is all about.
If the idea of tarot is not too weird for you, I recommend trying this. It's not a Magic 8-ball type deal, but it more just helps you sharpen what you're already thinking/intuiting. I use it almost daily to help clarify things, ask questions, even things like "should I take thses 80 million supplements or just chill out?"
I also like this deck because the cards are all, essentially, positive, althought some of them do give you warnings to hold up on things, or examine situations more closely. I did a reading for a friend, and she thought it ws super accurate and asked for another the next day; I was doing it mostly from the book (yes! it comes with an instruction book).
Even better, there's a FERTILITY card.
Check it out: http://www.hayhouse.com/details.php?id=3908
Posted by GreenFertility at 11:18 AM 3 comments: