Toothpaste has that same stuff in hand sanitizer 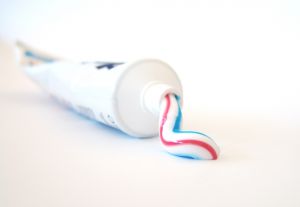 Great, now toothpaste manufacturers are adding Triclosan, a chemical that is banned in Europe, to toothpaste and it may be causing (1) superbugs and (2) is an endocrine disruptor (a BIG no-no for fertility).  Also, you NEED good bugs in your mouth, they balance out the bad ones.  This whole suuper-disinfecting thing (using ammonia on meat, bleach on veggies) is getting a little out of hand.  For fast whitening and freshness, use baking soda (read secret to white teeth here) !  No one needs toothpaste.

From the UK's Daily Mail:

For it seems an antibacterial chemical commonly added to toothpaste, including Colgate's Total range, may pose a threat to health. It is also widely used in handwashes and cosmetics.
The EU's Scientific Committee on Consumer Safety has warned that triclosan may promote widespread bacterial resistance to antibiotics and has called for further safety studies.
Meanwhile, the U.S. Food & Drug Administration is worried about bacterial resistance, as well as evidence that the chemical is a hormone disruptor.

read more about how toothpaste is spreading superbugs and disrupting your hormones here.
Posted by GreenFertility at 1:46 PM No comments:

I'm  not a big fan of ultrasound in general, being into energy medicine, but also check this out:

NEW YORK (Reuters Health) Sep 23 - Using ultrasound to gauge gestational age could put late-term female fetuses at risk of poor outcomes and even death, a new study from Sweden shows.
Indeed, up to a third of stillbirths among girls born post-term could be due to inaccuracies in these estimates, the researchers conclude.
Since the early 1990s, doctors have used second-trimester ultrasound measurements to determine the age of a fetus and estimate when the baby will be born, Dr. Alkistis Skalkidou of Uppsala Universitet and colleagues note in their paper, published online August 27th in Epidemiology.
But female fetuses, even at the end of the first trimester of pregnancy, are smaller than male fetuses, on average, Dr. Skalkidou and colleagues add, raising the possibility that a smaller, post-term female fetus could be misclassified as having a younger gestational age based on ultrasound measurements.
Posted by GreenFertility at 8:10 AM No comments: