Newswise — ATS 2011, DENVER - Children whose mothers or grandmothers smoked during pregnancy are at increased risk of asthma in childhood, but the underlying causes of this are not well understood.

Now a new study indicates changes in a process called DNA methylation that occurs before birth may be a root cause.

The study will be presented at the ATS 2011 International Conference.
DNA methylation is a process that can alter a gene’s usual function. These altered genes can be passed along from parent to child. In this case, researchers observed DNA methylation-related changes in the AXL gene in children exposed to maternal smoking in utero. The AXL gene plays an important role in many human cancers and in immune response.

“We found that children exposed to maternal smoking in utero had a 2.3 percent increase in DNA methylation in AXL,” said Carrie Breton, ScD, assistant professor of preventive medicine at The Keck School of Medicine of the University of Southern California (USC) in Los Angeles.
“These results confirm results from a prior study and present compelling evidence that environmental exposure to tobacco smoke during pregnancy may alter DNA methylation levels."’
Posted by GreenFertility at 7:37 AM No comments: 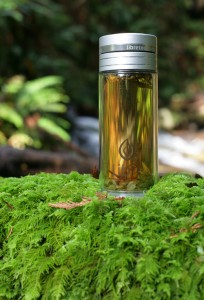 I love the Libre Tea glasses--non toxic, stylish, easy to use loose leaf tea--and love the new, bigger size even better.  The poly keeps it cool to the touch but the inside is glass, for health (no BPAs!) and great taste.  Plus, it's very styling.

Still fits nicely in the drink holder in your car or your hip messenger bag.

Check it out here: http://libretea.com/shop-libre/libre-glassn-poly-large/
Posted by GreenFertility at 9:39 AM No comments: