This is a weird post bringing together two disparate threads, but just wait.

You probably know the Koch brothers as the billionaire secret funders of WI gov. Scott Walker and his cronies in the union-busting schemes.  The Koch brothers can't wait until there's no democracy and everything is run by big business--them!

Nor surprisingly, they, through their companies, are also big polluters.  Among other things, they have been lobbying to have FORMALDEHYDE delisted as a carcinogen, because their paper plants produce a lot of it, and that's kind of annoying when the workers get cancer and blame it on them, etc.

Here's a little preview of their polluting:

In 2000, the EPA fined Koch Industries $30 million for its role in 300 oil spills that resulted in more than three million gallons of crude oil leaking into ponds, lakes, streams and coastal waters.

In 1999 a Koch subsidiary pleaded guilty to charges that it had negligently allowed aviation fuel to leak into waters near the Mississippi River from its refinery in Rosemount, Minnesota, and that it had illegally dumped a million gallons of high-ammonia wastewater onto the ground and into the Mississippi.

In 1996, two people where burned alive in their vehicle due to a poorly maintained Koch pipeline that had leaked flammable butane into a residential Texas neighborhood.

You can read more here.

Here's a list of Koch Industries products, some you probably use every day not realizing it's funding all this bad stuff: http://wagingnonviolence.org/2011/03/boycott-of-koch-products-gaining-steam/

But keeping the focus on the positive, check out this awesome organic free trade LYCRA free dress.  Yes, it's a lovely, stretchy jersey, double knit very densely so you don't need any ARTIFICIAL FIBERS.  It's a real go-to dress that you can wear three seasons (throw on a scarf, a jacket--wear it to work, I've even worn it over jeans for a casual look), looks great with tights and boots and well as summer-bare with sandals.  And it's very karmic and good-energy, and reasonably priced PLUS the people who made it had a fair deal for their labor.

Even better, tweet this post for a change to WIN A FREE DRESS.  When we pick the winner, we will contact you and Maggie's will directly send you one in your size. 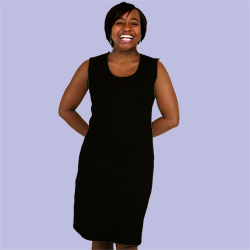 Posted by GreenFertility at 7:05 AM 3 comments: