Lasik and the Death of Pat Tillman 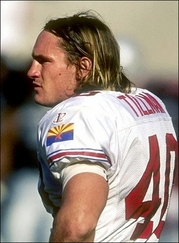 'Cease fire, friendlies, I am Pat (expletive) Tillman, damn it!' he shouted, again and again.

This is from the AP:

The latest inquiry into Tillman's death by friendly fire should end next month; authorities have said they intend to release to the public only a synopsis of their report. But The Associated Press has combed through the results of 2 1/4 years of investigations — reviewed thousands of pages of internal Army documents, interviewed dozens of people familiar with the case — and uncovered some startling findings.

One of the four shooters, Staff Sgt. Trevor Alders, had recently had PRK laser eye surgery. Although he could see two sets of hands 'straight up,' his vision was 'hazy,' he said. In the absence of 'friendly identifying signals,' he assumed Tillman and an allied Afghan who also was killed were enemy." More here.

Besides free dangerous anthrax vaccines, I guess free elective surgery is another perk of being the the U.S. military (see: Military Now Offers Eye Surgery), as they are fixing people up with Lasik (also known as PRK) to make 'em more combat-ready.

I was thinking of this recently because I was discussing how I hate going to the eye doctor because once they see my prescription, they start cackling, "Wouldn't you like to be able to see your toes in the shower?" and start pushin' the Lasik. I know better than to mess with my otherwis healthy eyes, and my friend, also beyond four-eyes (I'd say we're at least eight eyes, maybe sixteen) works in healthcare and she cackled back to me, saying, "You know why *I* won't get it? Look at the doctors performing it--they all still wear glasses. Interestingly, when I peered into one of those cheesy Lasik places in the mall, indeed, the guy was bespectacled. Not scientific...but...

In sum: I still can't believe this is the end of such a patriotic, altruistic, idealistic, intelligent and amazing human being...

Wow, that is so disturbing. And sad.

My vision is 20/600. My glasses are really intense. And I've often been tempted by LASIK but I won't do it. These are my only eyes. I'm not going to screw with them.