There are many reasons not to use CFLs (compact fluorescent lights).  You've probably already heard that they have mercury in them, so if broken, they can contaminate your house, and they will most certainly contaminate landfills.  But it also appear that while INTACT, they might still be able to give off mercury vapors, which is not good for anyone.  From Activist Post:


Another everyday product you may want to avoid is compact fluorescent light bulbs (CFLs). Only months after it was found that energy saving compact fluorescent bulbs release carcinogenic chemicals into the air, a new study has found that these harmful chemicals are continually released from the bulbs over a period of weeks to months. Furthermore, the study also found that the levels of mercury released exceed those that are considered safe for humans.

Flourescent light is also a source of "dirty" energy, it's rapid cycling makes you feel stressed.  As the parent of an autistic child, I can tell you that fluorescents make him crazy.  Read more: here

In our house we use LEDs, which have a nice clean light.  They are more expensive than incandescent or CFLs, but they last longer, too.  We also like the VU, nice, soft lighting, energy efficient, and long lasting.  This one is not an LED, but a ESL (Electron Stimulated Luminescence): 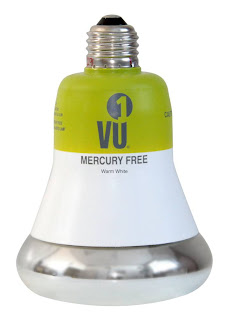 Posted by GreenFertility at 9:02 AM