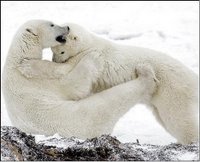 We have had a snowless Christmas here in RI and were watching old home movies of our house in Hibbing--six and seven foot snowdrifts!!!! This was some thirty, forty years ago. Scary, people! My mother reports there's no snow in MN, either. Do you need more proof of global warming?

Via Treehugger: ...Today, we find out that our readers and documentary film makers aren't the only ones taking a close look at the plight of the polar bear: according to the Washington Post, the Department of the Interior planned to submit a proposal today for listing the iconic animal as an endangered species. Such proposals are fairly routine, but this has special significance: it would "...[put] the U.S. government on record as saying that global warming could drive one of the world's most recognizable animals out of existence..."

The only utterly laughable glitch in this is that the Bush Administration absolutely refuses to discuss this in the context of Global Warming ("Duh....gee, George, where did the icebergs go, Huh? Huh?"):

From the New York Times:

But in a conference call with reporters, Interior Secretary Dirk Kempthorne said that although his decision to seek protection for polar bears acknowledged the melting of the Arctic ice, his department was not taking a position on why the ice was melting or what to do about it...

Again, if you want to use my info for NYTIMES.com:

Posted by GreenFertility at 9:00 AM

Happy Green New Year to you!
No snow in Ohio, either...

I still can't believe there was a time when we used to be able to jump off a 2nd floor balcony into the snow....sigh!