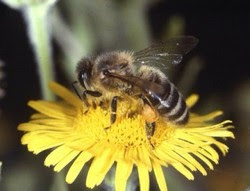 Got this via TreeHugger:

"TreeHugger has discussed EMF before and even had some April Fools fun with it. We have also discussed the baffling loss of honey bees in America and now in the UK and Europe.Some think they are related; the theory is that radiation from mobile phones interferes with bees' navigation systems, preventing the famously homeloving species from finding their way back to their hives. Apparently 'a limited study at Landau University has found that bees refuse to return to their hives when mobile phones are placed nearby. Dr Jochen Kuhn, who carried it out, said this could provide a 'hint' to a possible cause. Dr George Carlo, who headed a massive study by the US government and mobile phone industry of hazards from mobiles in the Nineties, said: 'I am convinced the possibility is real.'

Given that CCD started in America which is a lot less dense than Europe, with lower cell phone use and where many aviaries probably don't even have cell phone coverage, and that the article continues with 'blue-chip Swedish research revealed that radiation from mobile phones killed off brain cells, suggesting that today's teenagers could go senile in the prime of their lives.' We are not making little tinfoil hats for bees yet. Strange stuff from the Independent.

Here's a previous post on the mystery of the dying/missing bees.

And I already have a tinfoil hat for our house: Earth Calm.


Posted by GreenFertility at 8:24 AM

Hi Marie
I am sorry to bother you..I just want to ask a quick question. I started a new website on environment and health. If you have a minute please take a look at it www.downwithbasics.com
If you like it, perhaps we can exchange links? Thank you very much for your time.
webmaster@downwithbasics.com
Sicerely
Lara