Have I Gone Around the Bend? I like the EarthCalm EMF protector 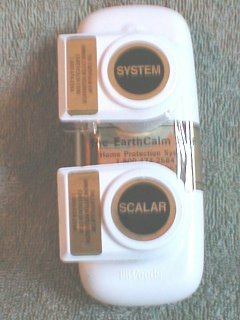 So, I noticed that whenever I accompany my son (who has healthy problems aplenty) in the MRI room, whenever they fire that x-ton magnet, it does weeeeeiiiiiirrrrrdddd things to me--I feel like all my cells are being rearranged. There was even an episode just like this on ER, but of instead of the fashionable FertilityBitch, of course it was the tie-dye, Birkenstock wearing, Tibetan-bowl playing granola dorkus who claimed the MRI rearranged all his cells or something, and the episode was all about making fun of him.

However, mid-way into this MRI business, I learned the practice of Reiki to help my son with all his operations (check out an article in the Washington Post about George Washington U using reiki in the operating rooms: http://www.washingtonpost.com/wp-dyn/content/article/2005/07/25/AR2005072501224.html), I have become incredibly sensitive to energy. The spiel about the body being energy does not seem so far-fetched to me, especially because, as a sort of party trick, I can actually make people's hair stand on end by doing Reiki on their head.

And what do you think EEGs and EKGs measure, but our bodies electrical impulses--and just two out of God-knows-how-many.

In any event, I found out about this product called Earthcalm, which is supposed to ground you, literally. It was suggested for people with immune issues in particular, and promised, "deeper levels of healing in which the body’s own acupuncture meridian system and nervous system are released from negative resonance to manmade electricity and strengthened to do the job nature intended." According to the website, all those cell phones, computers, power-lines are really screwing up our natural magnetism and our natural grounding within the electromagnetic field of the earth.

At first it seemed like nothing much happened when I plugged those puppies in, but one day I went to my acupuncturist, and for the first time, I felt the acupuncture rush that people had always been telling me about. My acupuncturist also commented on how much more quickly I reacted to the treatments than before. For this alone, the EarthCalm is totally worth it, to be feeling groovy while getting acupunture instead of just feeling like a pincushion. To give you some perspective: my late father was an acupuncturist, so I've been getting acupuncture all my life, and I never thought it worked...until now.

I haven't tried the little silver pendant that goes with teh system yet, but I just might....
Posted by GreenFertility at 11:09 AM

Very pretty design! Keep up the good work. Thanks.
»

Interesting website with a lot of resources and detailed explanations.
»

I have had one for a couple of years but I don't really feel anything for $149 EarthCalm unit I have?

my earthcalm unit just got delivered yesterday, i was so excited, i thought i would plug it in and everything would be ok lol but i got nauseous as soon as i plugged it in! but since i had been reading their website, i knew a healing crisis would probably be inevitable with me... it's weird, it makes me feel everything in MY SKIN.. i still have high hopes for it tho, my sleep was good last night.. thanks for the review, there's not many to be found out there

Researching EarthCalm and found your article. Great article! Thank you for sharing your experience!