The USDA: Misleading Consumers About Organic Milk--SIGN THIS PETITION!!!! 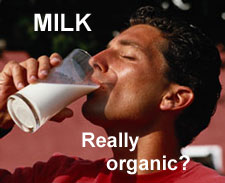 So-called "organic" producers conforming to the letter but not the spirit of the law definitely gets the b**tch up in Fertilitybitch, who believes that inherent mutual respect of the soil, animals, etc. is an integral requirement for a food item to be truly organic.

Check this out from our buddies at the Consumers Union:

Thanks to the Organic Food Production Act passed in 1990, the USDA is supposed to require that all cows have access to pasture if milk is labeled "organic." But this rule is largely undefined, and as a result, major factory farmers have been selling their milk as "organic" when really their cows are kept in cramped feedlots - only let out to pasture when they're not producing milk. Now agribusiness wants to make this loophole into a law - pressuring the USDA to adopt a new rule that would allow an organic label whether or not animals have access to open pasture.But this is not what consumers want - the majority of people surveyed by Consumer's Union believe that milk labeled as organic should mean the cows that produce it have grazed outdoors.If you don't want your organic milk to come from a feedlot, make your voice heard! Tell the USDA they need more enforceable standards for organic milk, not less.

UPDATE: THE USDA HAS EXTENDED ITS DEADLINE FOR ACCEPTING PUBLIC COMMENTS THROUGH JUNE 12TH

STOP SAD COW DISEASE!!!! Sign the petition here. Local yokels in the Rhode Island area, check out Louella's site farmfreshri.org where you can procure fresh goat milk from locally frolicking goats (this makes awesome yogurt and may be appropriate for people who can't tolerate cow's milk). Tell those evil factory farmers baaaaaah humbug, and tell Louella that the Fertilitybitch sent you!
Posted by GreenFertility at 6:12 AM

This is one of the things that seems to come along with the popularization of the greening of America. Big business sees the popularity - gets a hold of the products or the corporations that produce them or the branches of the federal government that regulate the industry - and they slowly lower the standards and start cutting corners. Perhaps it will be the other way around and as more people become educated, the demand for true organics will increase. We'll see, I guess.

Yes, in our capitalist society, if there is a hole, someone will exploit it. A lot of big companies are buying out the small ones and organic is becoming just another marketing category.

Walmart is going organic with organic rice krispies, for e.g.

But that's why the e-community can be so powerful in getting teh word our re: what's what. Thanks for stopping and please sign the petition, if you haven't already!

xo,
marie a.k.a. the FertilityBitch