Your Bra Can Kill You? 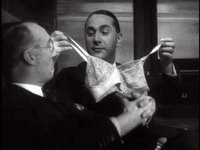 A French friend once said to me, "Oh, I see you don't wear bras either--so you know how bras cause breast cancer, right?"

Now, my friend, with her je nais se quoi, always looks gamine and chic. Ther Fertilitybitch, however, is just lazy (bra = another layer to deal with), Asian (no bra small enough), and, she vaguely remembers some Harvard study (which she cannot remember clearly enough so she will not cite it here) that studied breast size and breast cancer or something and then came up with a secondary conclusion that women who wear these super constricting underwire bras seemed to have lots of cancer but women who didn't wear bras at all had breast cancer rates about the same as men (who do, by the way, get breast cancer).

My friend said it had something to do with the bra squishing the area around the lymph nodes and preventing circulation, probably sort of like the way we used to scare our parents by tying a string around our fingers 'til they turned blue--for five minutes, however, not all day and sometimes (apparently for larger breasted women, the following is encouraged) wearing an underwire bra for support while sleeping, I guess in case you go jobbing in your sleep).

Let it not be said I'm a cancer-scare monger, but it does seem prudent to remember that the lymph glands' function is actually to gather and drain toxins. When the glands get too toxic and poop out--lymphoma time. So maybe we don't want to be wearing that elastic-coated piece of wire around our torsos all the time.

A 1999 article in the UK Guardian called "Dressed to Kill" stated "Recent medical findings blame clothing for afflictions ranging from poor posture and heartburn to cystitis and even cancer." (p.s., they also say that skinny drainpipe jeans seem almost as distant a memory as the 19th century strictures of the corset--hmmm).

Here's a book by two medical anthropologists, also called Dressed to Kill, that convincingly, if a bit prematurely, links cultures (e.g. contries with a lot of Hooters restaurants per capita) where women wear tight bras for about 12 hours a day and a higher incidence of breast cancer compared with more free-range countries.

And here is the "Brassage" bra from the Gaiam catalog, whose mission is to "support a healthy, eco-conscious lifestyle".

They claim this product is "A bra that actually improves your health" because it has special thingies to massage those "80% of the body's lymph glands" that bras constrict and put you at greater risk for breast cancer!!! It's a little weird to air this theory and then push a product of the maximo-constricting underwire type, when, if they believe in this lymph-gland theory, what they should be selling is the No-Bra that's light as a feather because it doesn't exist (maybe they could just charge shipping).

Fertiltybitch's picks: bamboo camisoles with a shelf bra (if you must) from Bamboosa (made in the USA) 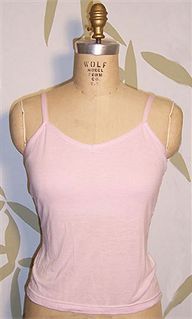 or Spun Bamboo's cami, which has adjustable straps. 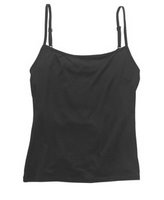 Posted by GreenFertility at 6:27 PM