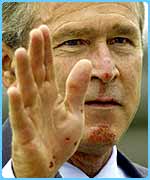 Apparently Bush spent most of the recent liquid-terror alert leisurely biking on his ranch...and no one makes a big deal about it like they did with Kerry's windsurfing....oh.....well...

Obviously I couldn't a pic to illustrate as the media, as always, give him a break (e.g., where are the pics of him falling off his Segway scooter--because he hadn't turned it on?). Anyway, I thought this one was at least symbolic--it's from when he was going too fast and lost control and took out some bobbie in England.

Sigh....check it out:
Bush staff wanted bomb-detect cash moved - Yahoo! News: "WASHINGTON - While the British terror suspects were hatching their plot, the Bush administration was quietly seeking permission to divert $6 million that was supposed to be spent this year developing new homeland explosives detection technology."