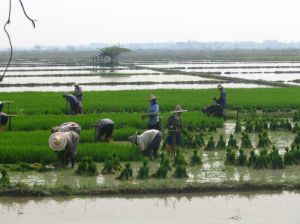 Howzabout some GMOs with that?

Japan, like the countries in the European union, strictly bans genetically modified (GM) food and tightly restricts agricultural imports, especially the all important rice and has not imported long-grain rice in raw form from the United States since the business year to March 1998, according to the Japanese farm and health ministries.

But it does import 235,000 tons of short and medium-grain rice, including rice powder, from the United States and 17,000 tons of processed rice products, which unfortunately, may be "accidentally" contaminated with GM rice.

This case also highlights the ridiculousness of global trade, just like NAFTA opened the doors for us (i.e., US) to flood Mexico with corn (coals ===> Newcastle) and thereby drown out small producers until Mexicans will be BUYING imported and fossil-fuel transported cheapo (and likely GMO) corn.

Now the US is messin' with Asians' rice. You can kick us off the planes, but don't mess with the rice!

From the Biotech Industry News blog:

"Last Friday, U.S. Federal officials announced that a long-grain rice sample tested positive for a genetically modified strain that had not yet been approved for consumption. The modified genes from the strain in question were developed to resist a specific herbicide.

The U.S. Secretary of Agriculture did not know where the strain came from or even how much conventional rice could be affected."

Read here a previous post about how it's very much in the GMO manufacturers' interest to have their patented GMO seeds "accidentally" (I dunno...) slip into the regular seed population because, by some stupid patent law, then THEY own the genes, and these organic farmers everywhere also "somehow" get GMO seed (sprinkled by the tooth fairy?) in their fields and end up having to destroy their crops, take the loss, and be sued by Monsanto (who probably put the stuff in there in the first place) on top of that. Where is the justice? (Not to mention, organic farmers don't get the welfare-like handouts of government farm subsidies, which drives the overproduction of crops like corn in the first place...)

I suppose some day, if you eat the GMO food and it gets into you DNA, Monsanto will own you as well.

Dear Monsanto, Bayer (ironically, a German company that makes GMOs not for Germany, obviously, but us!)Keep your GMO-cotton-picking hands off the rice!!

Add GM rice to another long list of things to avoid in order to preserve your health and fertility--eat organic!

Seriously, man, I will *hurt* anyone who messes with my rice.