Where were all the ADHD, etc., boys when we were growing up? 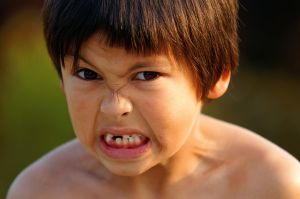 One has to ask: where are all these attention deficit disorder (w/ and w/o hyperactivity), autistic, dyslexic, bipolar, Tourette's, depressed, oppositional-defiance disorder kids (the majority, boys) coming from?

Maybe at least partly from little Timmy putting his pesticidey apples in his leady lunch bag when he's already a little bit damaged from a wee bit too much mercury in his vaccines?

Fresh from the NY Times (of course, buried on p. 13, next to story about how Bush is so very healthy...hey, he exercises 3 hours a day and does not let himself get stressed about anything! Hez-bah-wha? Very admirable)

Unions representing thousands of staff scientists at the Environmental Protection Agency say the agency is bending to political pressure and ignoring sound science in allowing a group of toxic chemicals to be used in agricultural pesticides.

The chemicals at issue are organophosphates and carbamates, long a matter of controversy over their environmental and health risks. They are in such pesticides as chlorpyrifos, methyl parathion and diazinon...which can affect the development of the brain and the nervous system,

A North Carolina researcher found that chlorpyrifos might have a more damaging effect on developing brains than other studies. “What we heard back from headquarters was, ‘No, he’s wrong,’ ” the scientist said.

“Chemicals like these can be harmful to children in ways we don’t understand yet,’’ the scientist said. “If there is disagreement, doesn’t that cry out for further research?”.

Here's what summer camp has turned to:

The breakfast buffet at Camp Echo starts at a picnic table covered in gingham-patterned oil cloth. Here, children jostle for their morning medications: Zoloft for depression, Abilify for bipolar disorder, Guanfacine for twitchy eyes and a host of medications for attention deficit disorder...

The dispensing of pills and pancakes is over in minutes, all part of a typical day at a typical sleep-away camp in the Catskills....

All my best friends take something, said David Ehrenreich, 12, who has Tourettes syndrome yet feels at home here because boys with hyperactivity, mood disorders and facial tics line up just as he does for their daily meds.

Brave New World! Great for anyone who has lotsa pharma stock, stressful for parents, not to mention what are we supposed to do with a generation of damaged boys (testosterone often potentiates toxins)? Start another war? We probably will have tons of aggressive, angry, frustrated dropouts...

And sorry to add more worry to your day, but remember my post about malaria and why supporting charities that buy mosquito nets is actually NOT a good idea because of the pesticides used on the nets? Well, they also sometimes add these icky chemicals in combination on those mosquito nets they then give "free" to pregnant ladies and babies, not to mention that Deltamethrin (mosquito pesticide)'s toxicity is exponentially potentiated by organophosphates. Of course, someone's keeping track of all this, right? Right? (I only have two words for pregnant ladies, who are carrying the littlest, littlest children ever: EAT ORGANIC).

My eldest daughter recommended [and bought us] some spirulina but we've not had much luck 'masking' it. Any ideas? Best wishes

Spirulina is great--very alkalinizing, EFAs, etc. You can get it in tablet form if you want to wash it down, which is how we give it to our 6-year-old. For us, I actually make it into "bars." Let me know if you're interested and I'll post the recipe. They turn out VERY green (festive!) and are great for mindless munching.

Anonymous said...
This comment has been removed by a blog administrator.
9:56 PM