Another Reason to Stay Far Far Away from Wal-Mart! 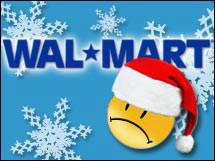 Shopping at Wal-Mart is not only bad for the workers, for the global economy, for small businesses, you can also get shot.

"PUTNAM, Conn. - Two armed thugs tried to rob a line of people waiting to buy the new Playstation 3 gaming console early Friday and shot one who refused to give up the money, authorities said.

...In Palmdale, Calif., authorities shut down a Super Wal-Mart after some shoppers got rowdy late Wednesday. In West Bend, Wis., a 19-year-old man was injured when he ran into a pole...

...Andrew Templeton, 20, and David Wiggins, 28, of Sullivan, Ind., were assaulted by two teens after waiting for 36 hours at a Super Wal-Mart, police said.

...A fight broke out. Wiggins' nose was broken, and he stabbed one of the attackers, Dylan Moss, 19, police said. Moss was in critical condition after surgery, officials said.

Video: the confluence of greed, corporate scamming, and the holidays and probably our faltering economy that's making people more desperate to save (?) their dwindling share of America's wealth. Disturbing!

Okay, this post is not directly related to fertility, but after watching the video, one has to think: do you want your kids, or anyone else's, to grow up in the world presaged by this video???

And dont forget this one:

Teens set off bombs in Walmart

Oh, eeek. I don't even think the prices in Walmart are that great (I'm speaking from memories of our pre-boycott days...), esp for all the exploitation they do.

But glad to see YOU're back in the saddle :)