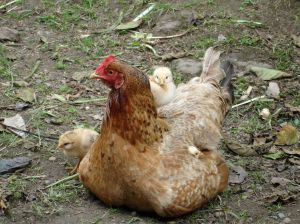 Thanks for the intriguing comments, and one point (as I was reminded by MAN FERTILITY) that I think is important enough to have its very own post is that most mass produced food is highly subsidized by the government. And subsidies encourage all sorts of bad farming practices: crops that deplete the soil, then you need more fertilizer/pesticides (corn), crops that are very energy inefficient to grow (again, corn), crops that are GMO (corn!) when we already have too much of it thanks to those $_)(@##$ subsidies. And last but not least, farms are now run by your usual faceless corporations and not by your friendly farmer.

So, to your friends and acquaintances who call you elitist, just point out that we are already (through our taxes) paying for the GMO corn crap being forcefed to the beakless chickens (while the organic small farmers get zip) andyou just want to be smart enough and NOT PAY DOUBLE.

Add better taste, better health, supporting a real live person and not a corporation to this equation. I hate when people make such a big deal about the so-called "free market", snarking about welfare, and then they let this subsidy thing run out of control.