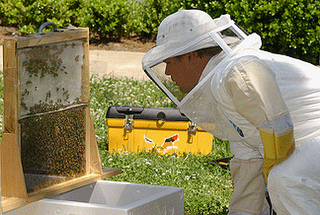 I'm reading Michael Pollan's Omnivore's Dilemma where he traces the sources of our foodstuffs and finds that antibiotics are dumped in chicken, pigs, beef. Sickly farm raised, Omega-3-less salmon are also given antibiotics, and then there's the whole overuse of antibiotics by your friendly doc/pediatrician.

Now, say it ain't so, but you could be getting antibiotics via your honey. I noticed our co-op was selling "antibiotic free honey," and so asked Max Gitlen, the general manager of our co-op, and here's what he said:

Most commercial apiaries give their bees antibiotics at this point. It's due to the fact that there is, generally speaking, a crisis in the bee world. As with many other
animals, we have bred our commercial bees to have certain traits (we want them to be productive, docile, etc) and as a result the vast majority of them are VERY similar, genetically speaking. These bees have bred with wild bees, weakening their genetic diversity as well.

As a result, all of them--domesticated and wild--are highly susceptible to the same diseases and bee mites, which have started to kill them off. This is obviously quite dangerous, as bees are the primary pollinators of fruits and veggies, and if they lack the necessary genetic diversity, they may not be able to develop sufficient resistance. Many fruit farmers have already lost portions of their crops to under-pollination!

MAN FERTILITY and I actually know someone who died of one of those antibiotic-resistant "superbugs." I suggest you minimize antibiotics whenever possible because you're probably getting plenty from some OTHER vector you don't yet know about...
Posted by GreenFertility at 11:08 AM

I loved Omnivore's Dilemma. That book really changed my life, my food choices and my feelings about individual responsibility towards the environment. The fact that living a life of corn syrup is not just bad for the body but also the environment, was very compelling to me.

Now, bees. How did we manage to screw with bees! They are the most amazing insects and it's difficult to hear about the damage we have done.

.....and if you think you can nullify the effects of antibiotics with yogurt alone....nope. Not enough critters in there. And what about those probiotics you get in the health food store in the refridgerated section? Dubious.

Basyr University here in Seattle did a study about (7?) years back; they took all their pharmacy stock of acidophilus off the shelf and sent it to an independent lab for testing. Guess how much LIVE probiotic was found in 10 samples?

So, if you're going to spend money on probiotics to compensate for the constant exposure we have to antibiotics, get it from a doctor whose product undergoes regular independent assay testing. Or call the company whose product you're using and ask them if they do independent lab assays.

I try to culture my own, kimchi, etc. That way you can taste the level of criters :)

Kimchi is my fav. way...my horse takes probio...wonder how reliable his is?

How can you taste the level in kimchi?

Love all the info on Green fertil!

Kimchi gets more sour as the critters multipl...I'm gogin to be posting a DIY recipe, shortly!

Sauerkraut is great, too--we make that as well. But I think kimchi has more micronutrients in it, though, bec. there's ginger, hot pepper, buchu (garlic chives, medicinal) and nappa cabbage (as opposed to regular cabbage) has the l. plantarum, a daikon, which is a hugely natural source of probiotics.