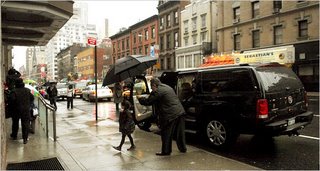 After my angry screed against the line of idlin' SUVs at my local prep school, multiply that by a hundred. Looky what I found today in the New York Times (my snarky ex-New Yorker comments are in {}s):

Once Around the Block, James, and Pick Me Up After My Nap

The cars gather in front of the 92nd Street Y in Manhattan about 8:30 a.m. In the front seats sit hired drivers (nobody uses the term chauffeur anymore). The cars are mostly big and mostly black luxury-edition sport utility vehicles like the Mercedes GL-Class or the GMC Yukon Denali. They fill the lanes in front of the Y’s entrance on Lexington Avenue, often two or three rows deep.

...The children — ages 3 through 5 — are enrolled at the Y’s famous nursery school. The livery convention on Lexington Avenue occurs most every weekday. Neighbors of the Y and parents with children in the nursery school say they have seen the number of cars and drivers increase considerably over the past couple of years...

...In exasperation, the director of the school, Nancy Schulman, drafted a letter to all families insisting that the drivers wait somewhere else while parents or baby sitters take the children in: find a legal parking space, or take their cars for a few spins around the block.

...Some parents applauded the action. “Personally, I think it’s great of the Y to do that,” said one mother who takes her child to school by taxi.

{What ever happened to taking the subway? Or walking???? One of the best things about NYC!}

...The Y is hardly the only school in the neighborhood where children get to school by car and driver. Dropoff hour at Nightingale-Bamford, on 92nd Street between Madison and Fifth Avenues, and at Dalton’s lower school, on 91st between Park and Madison, is often clogged by chauffeured S.U.V.’s....Over the course of four mornings this winter, at least 22 chauffeured S.U.V.’s were seen, most of them repeatedly, waiting in front of the school while parents brought in their children.

...A parent whom other parents identified as a chauffeur-using mother, Alison Schneider, whose husband, Jack Schneider, is a hedge fund manager, said, “I got the letter, but I don’t really have any feelings about it one way or the other. It’s kind of boring.”

...The consensus from parents who make use of a driver to deliver their children to school, even if the trip is just a few blocks long, is that time is scarce.

...{I love this quote:} Myrna Weiss, a former member of the Y’s board of directors and a grandparent of a child at the nursery school, interpreted the use of chauffeurs...: “It’s also about one-upmanship. That game used to be played much more quietly, over what clubs the parents had their children’s birthday parties at. There weren’t such visible signs of a pecking order.”

{I think this explains the lady I saw. People waste because they can, and its even becoming a status symbol---eeeeeeek! }

(use my username/password: "GreenFertility" on nytimes.com).

p.s. Anyone remember those pics of George H.W. Bush being chauffered (back when they used real, honest to goodness limos) to kindergarten in Greenwich?