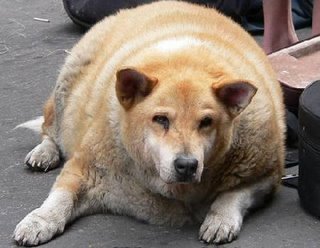 If you ever had any doubt that the drug companies, altruistic protestations aside, mainly want to get more people to take their drugs, take more drugs, take them longer, look no further:

“This is a welcome addition to animal therapies, because dog obesity appears to be increasing,” said Dr. Stephen Sundlof, director of the Center for Veterinary Medicine at the food and drug agency, announcing the approval of the drug.

Veterinarians define obese dogs as those that are 20 percent overweight. About 5 percent of dogs in the United States are obese, and another 20 precent to 30 percent are overweight, according to the drug agency. In all, Pfizer, the maker of the dog drug, called Slentrol, estimates that four million American dogs are obese and potential candidates for its therapy, which will cost $1 to $2 a day.

Not only is this silly in the face of real health crises facing people, but it's doubly brazen and outrageous because canine obesity can be so easily "cured" by feeding dogs less and exercising them more...
Posted by GreenFertility at 11:18 AM

Yikes, that dog is large! Time to cut down on the milk bones and learn to fetch!

That said, one of my cats is a little (little!) overweight.

My cat was kind of fat, too, but then it turned out he had a thyroid condition...

obesity is a problem common to both pets and humans and needs to be checked as early as possible.