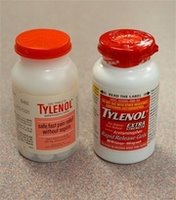 (photo: AP)
There has been some buzz in the autistic community that the standard pediatric practice of giving Tylenol (acetaminophen) to babies before their vaccines (ugh, we were instructed to give it before AND after) may set the poor kids up for additional vaccine damage because Tylenol screws up Phase II liver detox (it says this in the fine print, which we did not bother to read, because, as the child of a physician, I was told never to question anything the doc told us to do and second guessing would be rude-rude-rude, after all, who is the expert here?)

And when our son was hospitalized for his cancer, he got loads and loads of Tylenol III, the super duper strength, after all, he's had surgery on his spinal cord.

But interestingly, this is when a lot of his troubles began. Almost everyone who knew him as a baby saw that he was never the same kid after he went into the hospital--we went from smiley, sweet boy to cranky screamy guy, the crankiness and screaminess only getting worse with each round of vaccination. Of course, we are just crazy vaccine wackos. However, this AP story shows that at least part of our story seems to be clinically true...hmmmm?

Healthy adults taking maximum doses of Tylenol for two weeks had abnormal liver test results in a small study, researchers found, raising concerns that even recommended amounts of the popular painkiller might lead to liver damage...

[Read the rest of the story here].So maybe you might try some meditation, acupuncture, feverfew (an herb) for that headache; epsom salt baths for achy muscles before you damage your liver and without the fun of slugging back Mojitos (n.b. drinkers with already beleaguered livers need to be especially careful about Tylenol, need I add the obvious!)

There is also some suggestion that fever has evolved as nature's way of fighting infection and thus shouldn't be suppressed at all. It's not nice to mess with mother nature! Here's an interesting essay on fever suppression and the immune system that's a compilation of several different views.

We've also been in the middle of this vaccinate or not issue...both of my daughters are adopted and our options when we got home were: vaccinate according to what the vacc. records show, do a titers to find if there are antibodies there (if the recorded vaccines took or were even given), or totally RE-vaccinate! (which could mean up to 5-6 shots on one visit to catch up!) Luckily, our Dr. is not a crazy-vaccinator and suggested starting slowly with the most imp. ones. But I know people who re-vacc. and does that mean vaccine on top of vaccine? 6 at a time? HOWEVER, I also have a colleague that is an aut. specialist and she says much of the research on vacc. related autism is not well-supported and often research on vacc. for this purspose is not done to increase the reliability of the project....so...I'll just be trying feverfew and watching those vaccines...
elise

I've actually had fights with my mom over the whole medication issue.

She lives with us and is a total "medicate at first sign of discomfort" person.

I, however, believe it's better to let my son's immune system fight it out with whatever's attacking so he'll get stronger.

But otherwise I just provide comfort and let his body handle the illness.

For what it's worth, there's TONS of adopted autistic kids on the lsits I frequent; esp. because the guidelines for intl adoption are--revaccinate (and yes, that means layering vaccines on top of each other), 'cause those third world countries (where we're sending all our old mercury laden vaccines, by the way) must have sucky vaccines, right?

Your pedi seems pretty level headed. I'm actually NOT against vaccines. It's more that with every health intervention, one needs to weight risks versus benefits (as you are doing) and not go blindly to one extreme or another. I think if we would have known more, we wouldn't have given him all the vaccines, esp. since he had awful reactionsto them (nonstop screaming, fever, dump more Tylenol on it--hello?) and theh cancer was a biiiiig indicator that all was not well with his immune system.

That sounds extremely sensible to me! They're finding that lots of autoimmune problems today may be caused in part by a too-sanitized environment, and having pets can actually be stimulating to the immune system. If it's too clean, I think tkhe immune system gets bored and attacks itself.

And Oh, yeah, thanks for mentioning, a fever over 103 should be attended to medically because it can cause brain damage.

All medications have side effects (i.e., it's effectiveness is a side effect, basically), so,, as I was "chatting" with Elise, on needs to figure out what the risks and rewards are!

Tylenol (acetaminophen) lowers glutathione levels. Glutathione is the agent in your body responsible for removing toxins. When I google Glutathione or look it up in Wikipedia, it seems pretty important. Tylenol lowering that scares the heck out of me.

I certainly think it doesn't help...

polo ralph lauren RED! Series of design criteria - stylish, simple, self-cultivation. For the first time in 2009 in New York Fashion Week debut, RED! Series has a new Polo Shirts On Sale series from the traditional burberry polos LOGO, LOGO traditional crocodile logo at the Ralph Lauren Polo Shirts letter above, and the new series of letters with the cheappolos logo in line to be between a red symbol of Burberry Polo Shirts.

Although many people criticize ed hardy clothing for having nothing but tattoo patterns, being filled with waste and useless things, it is widely acknowledged that ed hardy clothes draws the most attention of both common young people as well as many Hollywood welcomed stars for its punk ed hardy t-shirts rock styles. As a matter of fact, in such a world where all ed hardy shirts are much like each other, ed hardy mens creates yet another totally new global sensation in fashion crowd for ed hardy womens fancy design. An increasing number of people are charmed by the magic of amazing tattoo and impressive color of ed hardy sunglasses.

The larger that the head size is for your babolat pure drive, the more power you will be provided with. Additionally, a larger wilson k six size means a larger sweet spot which is why beginners as well as intermediate players often prefer to work with a head microgel with a larger head size. Additionally, thicker frames are also capable of generating more power as well. Smaller head sizes on prince-o3-tour on the other hand are capable of providing less power, but significantly more control cheap tennis racquets.new polos men poloswomen polosdiscount polossummer polospolo shirts whosalepolo fashionembroodered polostennis racketsclothing poloclothingedhardyshirtedhardyclothingsummer ed hardy clothingcheap shirtsed hardy brand.