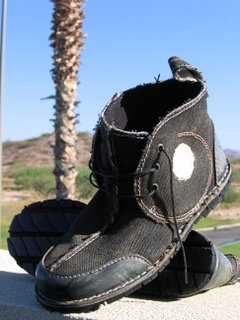 I sent MAN FERTILITY off on his research trip in these environmentally sound, all-vegetarian, organic hemp and a recycled tire sole boots brought to us courtesy of the cool folks at Adbusters. I thought they not only would be great for meetings and hiking alike, but their low metal content would make it a veritable breeze (well, it's still a pain in the ass) through airportsecurity.

Well, MAN FERTILITY reported that they indeed did make his feet feel fine (especially for sweaty man feet--a major detox pathway--something breathable and preferably organic is ideal) but unexpectedly they aroused more than a bit of suspicion at the airport security due to their non-mass-produced look. I.e., it made the nice folks at TSA wonder if he wasn't the next shoe-bomber or something, what with his non-branded, cloth, handcrafted shoes--at the very least, Communist! Oh well.

There was actually a funny article in the Times today about the comedy group, The Capitol Steps, who do a skit on how a sweet nun gets stopped by the TSA while a Viking with an ax, Michael Jackson, Darth Vader, etc. blithely breeze onto the plane--BUT, here's the rub, when the Capitol Steps ACTUALLY FLY somewhere, with their silly props, THEY get pulled into the scary back room and are not allowed to move to even go to the can while they're waiting for the FBI, all for carrying a piece of cardboard that says Acme A-bomb on it.

So the upside is, these shoes are really cool. Also, with each purchase you receive a single share of their anti-corporation, which includes entree to members-only forums.

The downside, they make you look (to the TSA people, at least) like the next shoe bomber. He's wearing them again tomorrow, as he likes these shoes very much, but he's also taking the bus.

By the way, MAN FERTILITY is an environmental historian and major source of much of the FertiltyBitch's enviro news. His next book, Shadows at Dawn, will be about an Indian Massacre that occurred at Camp Grant, in Arizona. His last book (which shares a title with RFK's book--I will note MAN FERTILITY's book came out first) was Crimes Against Nature: Squatters, Poachers, Thieves and the Hidden History of American Conservation.

Very pretty design! Keep up the good work. Thanks.
»

Thank YOU for stopping by!