"Win Free Sex" was the result of figuring out the top words likeliest to catch people 's attention [for those who read this earlier unedited post, I stand corrected!]. Apparently FREE, WIN, and SEX were the three top "eye-catching" words, so someone cheekily put it together as the irresistible WIN FREE SEX headline, but it could easily have been SEX WIN FREE in a less skilled hand.

But my point is: 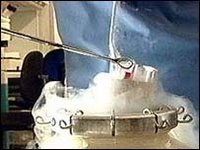 No one less than Doctor Richard Kennedy, spokesperson for the British Fertility Society, says that for

"couples experiencing [fertility] difficulties...the 'do nothing' option can produce results."

The FertilityBitch's modest (hah!) suggestion is that in the fertility arms race, cheap raw natural sex actually might be the best fertility "treatment" for some. Believe me, at 42, I understand that it's hard not to freak out as the biological clock ticks loudly in one or both ears. But at the same time, one needs to also consider the distinct possibility that technology could be waste of time and money AND give you cancer or other distinct side effects.

Dr. Kennedy goes on to say, "We should be giving this advice to patients." And "It's further evidence to confirm what we know."

So why aren't more doctors doing this?

...Maybe 'cause they need the bidness?

Ahhhh, capitalism--it's all about getting you to pay for something that should be free. WIN FREE SEX!~ may become the blog's new motto.

That's great! Sex is indeed free, well most of the time! And even when one chooses to pay for it, the cost never reaches into the tens of thousands! I'm someone who just recently said no to IVF. I am, however, paying for good local food, exercise and a bit of accupuncture. But this price does not compare to IVF and will most likely diminish (as opposed to increase) my chances of getting cancer in the future, god willing.

Oh, an almost forgot to comment on the adorable picture of the cuddling lady bugs!

"sees title and spits all over monitor" thanks for almost killing my monitor >_< electricity and water DON'T mix. I used something similar to that title when doing a propaganda project in communications. You don't look 42. More like 33-35. as I have found natural usually is the best way to go. It worked for all of my pregnant teenage friends >_<.

Anonymous, yes, unlike doing drugs, you get to "take home" all the benefits fo taking care of yourself--don't forget stress reduction-and this won't increase your chances of cancer, that's for sure.

Christina, yeah, everyone says my husband and I look young--that's what clean livin' will do. My hair has actually gotten DARKER when switching to organic foods, not eating junk, and better shampoos, etc--I think it takes a load off the ol' oxidative stress.

I feel better than I did when I was in college...

thanks for the comments!
marie

This is a neat blog with lots of interesting stuff in it.