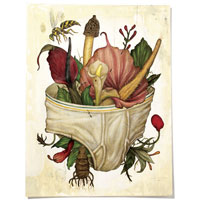 It's pretty obvious that smoking isn't great for sperm, as if can cause breaks in the DNA, but did you know that (from the current issue of Men's Health):

"Smoking can shorten your penis by as much as a centimeter. Erections are all about good bloodflow, and lighting up calcifies blood vessels, stifling erectile circulation. So even if you don't care all that much about your lungs or dying young, spare the li'l guy."

Some MAN FERTILITY readers may object to the characterization of the "li'l guy" (at least they put the apostrophe in the right place, not like Lil' Kim), but there's more helpful "member" tips in the article.

And, relatedly, from the Smoking Gun, if anyone remembers that weird case of the judge who came up with this home-made device that he'd wear under his flowy robes so that he could multi-task with some self-recreation while deciding IMPORTANT LAW CASES (whatever!) Verdict Coming For "Penis Pump" Judge - June 29, 2006: "charged with indecent exposure for using a penis pump (among other really gross acts) while on the bench."

Maybe he was a smoker just trying to get some of his length back?

tags technorati : smoking fertility
Posted by GreenFertility at 7:12 AM

We are the best of the best in Bongs with a beautiful accessories and we have the best service.
Be one of the ones that have the privilege to enjoy our Bongs.
we have all the ones that need to obtain not late more and contact us now.
Head Shop and Bong Amazing Legal Herbal Highs, featuring Herbal Smoke, Bongs,

A non-erect penis usually measures between 8.5cm and 10.5cm (3-4 inches) from tip to base. The average figure is about 9.5cm (3.75 inches), but this kind of precise measurement is rather valueless. Many factors can cause a temporary shrinkage of two inches or more, for instance cold weather or swimming, so you needn't worry if you happen to fall short of the average figure. http://www.viagrathunder.com

Generic Viagra is the best choice medicine for erectile dysfunction as it can be taken regardless of the age of the patient and works unhindered with most medicines.