Get Your Cotton-Pickin' Hands off our rice! 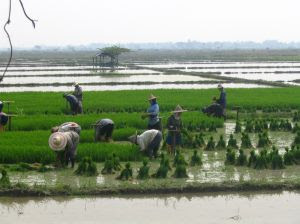 You know how I am about rice. Well, in today's New York Times, there was this tiny, tiny tidbit tucked away in the SCIENCE section about arsenic in rice, and how much of it comes from all the crappy pesticides they put on cotton (another reason to support organic cotton, people, besides the fact that non-organic farming of cotton actually dried up an inland sea):

Rice may be a great accompaniment to a main dish, but some rice apparently comes with an accompaniment of its own — the toxic element arsenic.

In the journal Environmental Science and Technology, P. N. Williams and colleagues at the University of Aberdeen in Scotland report on a study of rice bought at American supermarkets. Comparing products from the nation’s two major growing regions, the researchers found that rice from South-Central states like Arkansas and Louisiana had about 30 micrograms of arsenic per gram, or nearly twice the level found in rice from California.

The most likely reason for the difference, the researchers say, is that rice growers in South-Central states are increasingly using old cotton fields, where years of application of inorganic arsenic as a pesticide has contaminated the soils.

Arsenic is a carcinogen and can cause skin, reproductive, developmental and other disorders. Given that most Americans do not eat large amounts of rice, the arsenic levels in the tested rice may not result in excessive exposure to arsenic ?? What IS a "not excessive" exposure to a carcinogen???.

But the researchers note that some population subgroups — among them Hispanics, Asian-Americans and people who suffer from celiac disease and must avoid wheat products — eat much more rice on average. So for them, the researchers calculate, exposure may exceed the limits established for arsenic intake from water, the main source of the element for most Americans.

Interestingly, my parents (and other Korean parents I know) always eschewed supermarket rice and instead insisted on this one brand of rice from California, everyone agreeing it "tastes better." Thumbs down to arsenic as a condiment!

And if you aren't getting your daily RDA of arsenic on rice alone:

Chicken With Arsenic? Is That O.K.? - New York Times: "Arsenic is deliberately being added to chicken in this country, with many scientists saying it is unnecessary."
Posted by GreenFertility at 8:21 AM

I'm assuming that purchasing organic rice is a good option to avoid arsenic? This is insane and it makes me entirely angry that certain simple things, like eating rice or buying a cotton t-shirt have become so complicated. BTW, went to John Master's salon in NYC to have my hair colored without the use of toxic chemicals - why the @#$& isn't everyone doing this???! Yes, another simple thing that is truly complicated - going to the beauty salon.

THat's funny, I was just thinking/worrying about toxic hair salons today. Was it hard to get in there? I was thinking of stopping by when I'm in nyc.

And I'm not sure how much organic rice will guarantee no arsenic, in that the stuff stays in the soil forever, but I think there's a better chance that an organic field was not only a cotton field...

It was pretty easy to make an appointment. I just called a couple weeks ahead. I loved it - it had a very spa-like hip feeling, loved having cucumbers on my eyes as I was getting my hair washed! And the whole salon smelled wonderful as it is entirely all natural - no perms or hair straightening either. A bit more expensive than what I usually pay for but also a better cut than I usually get. I was thinking to justify it by accepting my grey hairs (started getting them at 23!) for a bit longer in between cuts;)