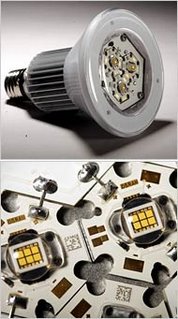 Okay, regarding my earlier post about fluorescent bulbs containing mercury, I've been getting emails asking about an alternative. And yes, there is one (plus, none of that annoying buzzing, which some autistic children are very sensitive to):

From the New York Times:
By Matthew L. Wald

A. You might try light-emitting diodes, or L.E.D.’s, which give out more light per watt of electricity than compact fluorescent bulbs.

Light-emitting diodes were invented in the ’50s. They are semiconductor devices — a kind of computer chip — that give off light when current is applied to them. Depending on their chemical makeup, they can emit green, blue, red or white light.

L.E.D.’s are now available with standard screw-type bases, so they can easily replace incandescent or compact fluorescent bulbs in your home. They are also sold in “high-hat,” or downlighting, fixtures for the ceiling. The face of most L.E.D. bulbs looks like a circuit board and the light they put out resembles a cluster of brilliant dots, each about the size of an aspirin tablet. An L.E.D.’s light is much whiter than that of a standard incandescent bulb, or even a compact fluorescent bulb, and L.E.D.’s work well on a dimmer or a timer. But like spotlights, they cast their light in one direction, so they don’t work in table lamps.

The city of Raleigh, N.C., recently announced that it will begin installing L.E.D.’s in some of its streetlights, and if they work well, will consider converting all 33,000 streetlights to L.E.D., according to Daniel Howe, an assistant city manager. Raleigh is using L.E.D. lights made by Cree Inc., of Durham, N.C., with components developed by the Lighting Sciences Group, of Dallas, which also makes bulbs for home use, shown above.

Posted by GreenFertility at 6:30 AM

Thank you for offering a sane alternative to the energy saving mercury lightbulbs. It is hard to believe such a dangerous thing is touted as a green answer.
Thank you, thank you, thank you; i will look into this further.

Aston Villa rode their luck at Hull City where an 88-minute own goal from Kamil Zayatte saw them leapfrog three points clear of Arsenal and into fourth place in the Premier League wow gold with a 1-0 win.

Villa had to survive Hull penalty appeals for a handball against Ashley Young in time added on, television replays showing that referee Steve Bennett wow gold correctly rejected the claims after consulting a linesman.

Bennett had been involved in controversy after just five minutes when American goalkeeper Brad Friedel looked to have handed Hull the initiative and threaten Villa's return to the Champions League qualifying wow gold zone.

Friedel spilled wow gold the ball under pressure from Nick Barmby and stand-in right-back Nigel Reo-Coker turned it into his own net as he attempted to wow gold clear.

But Bennett cut short wow gold celebrations at the KC Stadium -- and let Friedel off the hook -- when he ruled out the score for an apparent infringement by Barmby.

Promoted Hull were looking for only their second win in 11 games while wow gold Villa arrived unbeaten in seven and it looked to be heading for a goalless draw when the home side suffered a cruel late blow.