There is truly worrisome news on the horizon. A drug company, Intervet is trying to get FDA approval for the use of a specific antibiotic to be used in the treatment of respiratory disease in cattlle. Unfortunately, the antibiotic, Cefquinome is a 4th generation cephalosporin, is a drug that has been limited in it’s use by health care providers for the treatment of serious antibiotic resistant organisms. So, by using it to treat cattle, we would protentially be exposing a wide swath of the microbial world to the workings and nature of this antibiotic, allowing the development of strains of microbes that would be resistant to this last line defender.

At that meeting, the American Medical Association and Infectious Disease Society of America joined KAW members in testifying that use of cefquinome in cattle could increase cephalosporin-resistant E. coli and Salmonella bacteria, two major causes of food poisoning in humans

This particular genie may already be out of it’s bottle:

In Europe, where Cefquinome has already been approved and used in livestock under the brand name Cobactin, E. coli and Salmonella bacteria isolated from animals have already been found to carry resistance to this and other cephalosporins. In the U.S, where 4th generation cephalosporins have not yet been approved for use in animal agriculture, resistance to these drugs is uncommon.

It is not just the FDA who must to say no to the big drug companies that are encouraging the inapropriate use of reserved antibiotics. The time has come when we no longer have the luxury to allow unchecked access to our most potent weapons in the fight against drug resistant organisms.

And then read in the Brown Daily Herald this morning that the FDA is indeed "on track" to approve the drug despite objections that it'll be really really bad for people. 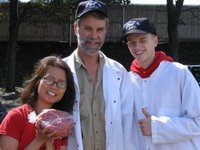 Finding a local farmer for fresh meat is not as difficult as it sounds. And in my very small department at Brown, I found a number of people REALLY happy with our joint purchase, it just hadn't occurred to them to do it before. Just ask!

Eatwild.com to find stuff in your area.

Meeting the Meet, GreenFertility's local experience wherein she picks up the moniker "Beefalo gal."
Posted by GreenFertility at 7:55 AM