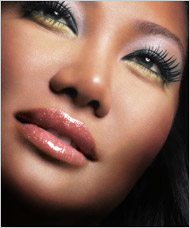 ...Kimora Lee Simmons, a flamboyant ex-model with the proud carriage of a Masai warrior and the flirtatious charm of a geisha...

I guess this will be filed under MISCELLANEOUS RANTS when I figure out how to do categories.

Does ANYONE find it odd to describe Kimora Lee Simmons, who is half black and half Korean(? see **), by such racially and sexually charged and stereotyped and intellectually sloppy images?

Maybe I'm overly sensitive? Take my race/sex in the media test: try plugging in a man + caucasian into the above formula. I dunno, George Clooney has the nice straight carriage of a Nazi? (the problem with this exercise is that there aren't enough white stereotypes!)


** Wikipedia says her mother is Japanese, but her story is a bit "weird": Heres a story in NY Metro for the eternally curious: "Her mom’s story is very Joy Luck Club, Kimora says. Joanne Perkins was born into the chaos of the Korean War and later adopted by an American serviceman who had spotted her mother filling sandbags in Inchon. Joanne maintains that her “full-blooded Japanese” mother went to Korea from Kyoto as a refugee during World War II, though this would make her a historical anomaly. There were few, if any, refugees from Kyoto, since it was never bombed, and those who left for Korea at the war’s end were invariably ethnic Koreans who were repatriating." I.e., something's weeeeiiiiiirddd about that story. It would be like birds migrating north for the winter (with global warming, who knows?) for a Japanese to painfully wend her way into a country full of Koreans extremely angry at the long and cruel colonizations by the Japanese

As always, you can use mine:

if she is korean, why describe her witht the term of geisha?

Haha--I actually said the SAME thing in the draft of my post, but I wasn't able at this time to confirm if she's Korean or Japanese, so I thought before I shoot my mouth off...

I happened to know Kimora's mother from the very small high school we attended. She always said even then, that her mother was from Japan. She was NOT a crazy, weird girl. She was very bright, a cheerleader and popular and I had no reason to disbelieve her then or now. If she happens to see this post, my name is Bobbi. My sister Debbie was a very good friend of hers. She can contact us through the high school reunion site. She will know where to find it.

I don't doubt that Kimora's mother claimed that her mother was from Japan. The key word being "claimed".

It's just that historically, this is not that credible. While anything is possible, my bet is that Kimora's mother actually doesn't know too much about her own mother or her mother actually lied to her.

I don't doubt that Kimora's mother claimed that her mother was from Japan. The key word being "claimed".

It's just that historically, this is not that credible. While anything is possible, my bet is that Kimora's mother actually doesn't know too much about her own mother or her mother actually lied to her.

torimarch said...
This comment has been removed by the author.
1:30 PM

i'm japanese and i think kimora cannot be a japanese descendent.
i thought she was either 100% black or quater korean(because of her face and name)+75%black until now...
kimora's(her mom's) story sounds very awkward and none of us would believe it unfortunately...