Organic Spinach is not Evil 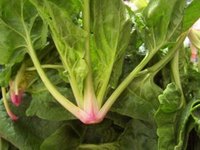 I don't know why everyone's been so quick to jump on the diss-organic bandwagon!! A report on ABC News last night showed big pictures of EARTHBOUND FARM ORGANIC signs while mumbling about how the FDA searched and so far failed to turn up any E. coli in the packaging plant or anywhere else. At this writing, they still haven't found any in spinach yet (kids wait with bated breath)!

And, like the DDT malaria thing, they are missing the big picture. E. coli becomes pathogenic when you force cows to eat grain. In fact, I just blogged about this. Who knows the reach of E. coli-laden cow patties? Water? Fertilizer? Sewage?

Here's an article , Diet And Disease In Cattle: High-Grain Feed May Promote Illness And Harmful Bacteria, from SCIENCE magazine if you want more detail.

I don't think people realize that E. coli also naturally populates the human digestive tract . In fact, to help our son's digestive problems, for a while I was buying E. coli from Germany, a patented strain called Mutaflor (a product that, unfortunately, we learned was also a favorite of Hitler, who was nothing if not health-conscious), but I stopped because I was worried about someone thinking I was importing biological weapons or something -- sheesh.

Anyway, no one wants to talk about our industrial farming practices that have gone out of control. Instead, the FDA wants to spray those icky viruses (bacteriophages) that eat E. coli on meat--like your kids' hotdogs--because there's bad E. coli around everywhere, and it's cheaper and easier than "cleaning up the meat processing plants." Can you say ICK? Also, who's to say that when your kids eat the hotdogs, the viruses won't continue to eat the beneficial flora in the gut? Why does no one think more than one step ahead about these things? This is almost as good as when they used to X-ray people's feet in shoe stores!

So anyway, keep all this in mind next time some smarmy John Stossel-type suggests that not only is organic food a scam but it's also poopy. They wish!